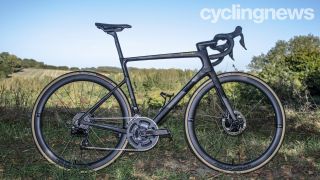 The Musette is Cyclingnews’ roundup of some of the world’s best cycling gear. We’ll take a look at pro-level equipment, bikes and components, alongside some of the most desirable clothing and newest accessories in the sport.

Scroll down for a look at the range-topping Cannondale Supersix, some brand new wheels from Hunt, a power meter that's gaining plaudits for its accuracy, and a pair of stylish knit shoes from Italian brand, Vittoria.

The Cannondale SuperSix EVO is a weapon of mass reduction, a bike for the high mountains - always has been. Despite holding out for what feels like forever, the American brand has finally taken the aero treatment and applied it to its lightweight climbing bike, the SuperSix.

Now in its third iteration, the new SuperSix represents the antithesis of what we've come to know and love from the SuperSix EVO and, while this style departure will come as a shock to purists the world over, it ultimately represents a move in the right direction. Version three aims to be more competitive than before while retaining the handling characteristics and lightweight qualities of the previous model.

The design team was tasked with reducing frame weight, dialling in compliance, retaining the handling balance of its forebear while ensuring it complied with modern aero bike doctrine. As such truncated aerofoil tube profiling, dropped seatstays and an integrated cockpit with hidden cabling forms the crux of the new model. Yes, it represents a bold leap forward in terms of design but the core fundamentals of the original SuperSix EVO remain - light, fast and agile.

According to the Connecticut-based bicycle maker, the new SuperSix EVO is 30 watts faster at 48.3km/h than its predecessor and nine watts faster than the Specialized S-Works Tarmac - wind-tunnel verified.

Is it pretty? Well, it's different, very different. The new SuperSix cuts quite an anonymous figure - generic almost, but a series of ornate graphics and golden decals do help spruce it up. You could argue that the visual drama could (and should) have been taken to another level by stitching in some heritage but perhaps this is something we will see further down the line.

It does look good - especially when tricked out in Dura-Ace specification. Apart from featuring a Hi-MOD carbon frame, the top-level model you see here comes with all the bells and whistles such as a full Shimano Dura-Ace Di2 groupset. Other components making up the build include an integrated bar/stem and seat post by KNOT, Cannondale's HollowGram SiSL2 with pre-installed Power2Max NG Eco power meter and Hollowgram 45 SL KNOT wheels. It's an exquisite build.

The good news is we have this model on test for the next 12 months.

Having owned four previous Cannondale Supersix EVOs the new model has big shoes to fill. Although the visuals are very different and will take some getting used to, there are a couple of nuances that pay homage to its forebear, particularly in the way it rides and climbs. - Aaron Borrill

Look out for the long term intro and a full review on Cyclingnews soon.

Stages Cycling might have brought affordability to the segment with its crank-based power systems, but it's the pedal-based units from PowerTap, Garmin and now Favero Electronics that are fast-becoming the go-to choice among cyclists.

Not only are power pedals easy to swap between bikes, the plug-and-play nature nullifies the need for complex fitting procedures as experienced by crank, hub, spindle and spider-based power meters.

Favero Electronics may be a newcomer to the power-meter realm but the Italian manufacturer has taken the fight to PowerTap and Garmin by offering a lighter, cheaper and more accurate power pedal - the Assioma. In fact, they weigh just 148g per pedal, which is significantly less than the Garmin Vectors and PowerTap P2s (216g per pedal).

It's a tidy-looking package - all the sensors and strain gauges are located in a housing next to the pedal body, which measures directly at each axle. Not only does this neat little design cue ensure the Assiomas look like an ordinary pedal and not as chunky and bulky as its rivals, but it also ensures the electronics won't get damaged by falls or impacts, meaning it's easier to maintain down the line. They're also IP67 certified.

The pedals are easy to install and even simpler to pair with your head unit. Simply download the Favero Electronics app, search for your pedals, set your crank-arm length and perform a zero-offset to ensure accurate readings. A nifty feature is the rechargeable lithium-ion batteries that return around 50+ hours of ride time. Both pedals can be charged at the same time thanks to a double micro-USB cable.

Unlike other power meters that harvest data based on the angular velocity of the crank arm through each rotation, the Assioma uses an instantaneous angular velocity (IAV) measuring technique thanks to an on-board gyroscopic sensor. According to Favero, the IAV way of harvesting data is class-leading, with accuracy to a maximum deviation of only one per cent.

We're just a few weeks into our six-month long-term stint and are already impressed with how the Favero Assimos are performing. So far, our experience has been glitch-free and the data has been tracking accurately when benchmarked against a direct-drive smart turbo trainer. - Aaron Borrill

As we featured in our recent tech gallery from Eurobike, there's something new coming from Hunt, and we can bring you a few details. Being launched officially in the next few weeks, Hunt has a new sub-1,300g, low-profile aero carbon clincher road wheel. The wheels will be manufactured as a system, rather than cherry-picking components from multiple manufacturers, and they use a range of new technologies.

The rim is constructed using filament winding technology. The bulk of the rim is created at steep angles before shallower angles are used to strengthen the areas at the rim holes, this also results in a stand-out light-catching pattern. The rim profile is 36mm deep and has an internal width of 20mm. Rim braking will come first, but disc brakes are in the pipeline.

Replaceable carbon-fibre spokes are used, which feature mechanically fitted sleeves/nipples instead of more-typical bonding methods. Hunt's testing shows these wheels to be up to 30 per cent stiffer than the steel-spoke equivalents in Hunt's line.

Sadly we've not been able to put these wheels through their paces to see if they're worthy of a place in our list of the best road bike wheels. Rory Townsend of Canyon DHB p/b Bloor Homes - the British continental team sponsored by Hunt, will be representing Ireland at the World Championships in Yorkshire, and we're told he'll be riding on these very wheels.

We're expecting them to be called the Hunt 36 Carbon X2, yet there are a few unconfirmed details, such as whether CeramicSpeed bearings will be available, and the overall price. - Josh Croxton

Nothing beats the visual allure and indisputable quality of a handmade pair of shoes - perhaps it's the human connection but there are some things a machine just can't replicate. Vittoria Cycling is one of those companies that prides itself on the handmade philosophy. The company was founded in 1976 by former professional cyclist, Celestino Vercelli, who learnt his craft from his father - a master shoemaker - after retiring from the peloton.

Handmade in Biella, Italy, Vittoria knows a thing or two about designing and manufacturing cycling shoes; having supplied legends such as Stephen Roche, Marco Pantani and Stefano Garzelli during their careers.

The 1976 Knits pay homage to the company's humble beginnings with retro-chic cues that combine classic proportions with lace-up retention. In a world obsessed with technology, weight savings and out-and-out performance, the 1976 Knits show that style and craftsmanship are still highly sought after. The Knits feature a breathable, exquisitely woven, water-resistant-treated fabric upper which is complemented by multi-directional stitching techniques and textural surfaces. These surfaces vary in feel creating a visual and sensory experience.

The heel-cup exterior is finished off in suede-like material replete with embroidered stitching that reads '1976, Made in Italy' - this is not a performance shoe, it's a work of art. As such the shoe can be had in the choice of nylon-reinforced, carbon-composite or SPD Touring soles, no carbon fibre here. Weighing in at 285g a shoe the 1976 Knits are far from the heaviest options around but were never designed to take the fight to the main players. Rather, the Knits are a celebration of cycling, a homage to craftsmen the world over and a stark reminder that there will always be a place for handmade products in cycling. - Aaron Borrill