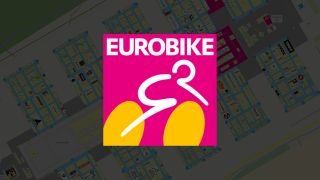 Eurobike 2019, the world's largest trade show for the cycling industry has finally come to a close. Cyclingnews' time in Friedrichshafen was dedicated to hunting down the biggest news and latest tech from the show. At Eurobike 2019, more than 1400 exhibitors showcased their hard work to the industry and global cycling press. As ever, this year's show was packed full of tech, bikes, kit and more.

Below, we have compiled all the news and tech galleries found at Eurobike 2019, so scroll down to see what was on offer at the show.

Throughout our time here in Friedrichshafen, Germany, we've been on the hunt for the newest and coolest tech. We've seen hyper-lightweight components from Tune and Selle San Marco, award-winning new shoes from Fizik, new special edition pedals from Look, light-sensitive eyewear from POC, and even Egan Bernal's Tour de France-winning Pinarello.

As we reported recently, CeramicSpeed and Specialized have teamed up to retrofit CeramicSpeed Driven to a Venge, proving it to be the most aerodynamic groupset available. Here at Eurobike 2019, CeramicSpeed have tackled their critics head-on with a wireless electric shifting model, an offroad version, as well as a singlespeed version that can perform under load.

Wahoo told us to expect 'the next big thing', and at 10:00 CET, they unveiled the new, fully-integrated Wahoo KICKR BIKE.

A combination of the primary features found on the KICKR trainer and the KICKR CLIMB, the $3500 KICKR BIKE features a simple set up, advanced personalisation features, tactile feedback, and Gates Carbon Drive for a maintenance-free life.

The days are gone where every major bike brand would launch their entire product range at the show, and this lack of routine opens the doors to varying trends at each edition of Eurobike, with 2019 being the year of e-bikes, gravel, and indoor cycling.

Read our roundup of Eurobike 2019