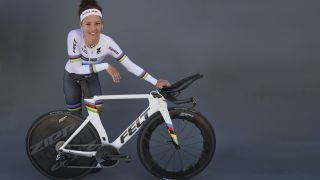 This time last year, Chloe Dygert stormed to time trial victory at the World Championships in Yorkshire. The then-22-year-old dominated the race, completing the 30.3-kilometre course in a time of 42:11.57 and beating Anna van der Breggen into second place by 1:32. Annemiek van Vleuten, a renowned time triallist and former two-time world champion, was third at 1:53.

More impressively, the young American, who already has seven world titles on the track, chose to ride the undulating 30.3-kilometre course without a power meter.

Dygert plies her trade for Twenty20 Pro Cycling, a women’s domestic elite team under USA Cycling, run by Nicola Cranmer, which is named as such due to its focus on the 2020 Olympics. The team's bike sponsor, Felt, celebrated her success by gifting her with a custom bike - as is customary in the upper echelons of professional cycling.

Like her team, Dygert's next big goal after Worlds was the 2020 Olympics in Tokyo, which for reasons we're all aware, has unfortunately been pushed back to 2021. Because of this, the custom-painted Felt DA time trial bike, resplendent in its rainbow stripes, has yet to be ridden in anger by Dygert.

The UCI cycling regulations don't specifically state whether or not Dygert would be permitted to use her world champion's edition bike on Thursday's time trial, however, rule number 1.3.063 does make mention that the rainbow jersey can only be worn until the "day before the world championship of the following year," suggesting the same rule would apply to equipment.

Upon receipt, Dygert expressed pride in 'earning' her new bike. "Felt Bicycles, Sram and Zipp have carried me to 10 World Championship titles on the track and road," she explained. "I always love new bike day. But what makes this new Felt day so special is that it’s not just another bike. It’s a bike that I feel confident on and a bike that I’ve worked so hard for and I will get to keep it for the rest of my life.

"Everything I did to earn this bike is what makes it so special and to ride it and own it is a privilege."

Dygert enters the 2020 UCI World Time Trial Championships in Imola as the hot favourite, so unless Felt has another new TT bike in the works already, there's still hope yet that the bike will get its chance to shine.