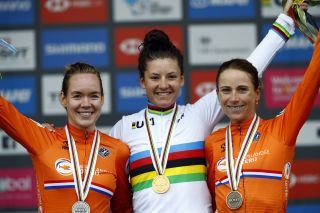 Chloe Dygert Owen returned from a concussion suffered more than a year ago to dominate the elite women's time trial at the 2019 UCI Road World Championships in Yorkshire on Tuesday.

The American was prepared for victory but surprised even herself when she learned that she had put more than a minute and a half into Dutch favourites Anna van der Breggen and Annemiek van Vleuten.

"It was definitely a surprising day out there … I had no idea what to expect because this is my first time racing against these girls in two years," Dygert Owen said. "It was a really special moment. One of my biggest advantages today was not having my power meter. It was just full gas from the beginning. Maybe I went out a little bit too hot, but I was able to keep it going."

Dygert Owen crashed heavily in the closing kilometre of stage 1 at the Tour of California last May. It took her nearly a year to recover from the concussion that she suffered in that accident. In addition, she has ongoing hip and knee pain. She also suffers from a degenerative back injury that she said causes the vertebrae of her spine to feel like they are grinding.

"I've had a lot of injuries now, and that's definitely something that I'm going to have to live with," Dygert Owen said.

Some of Dygert Owen's injuries have subsided, however, and she has been training and racing at almost full capacity since mid-summer. She had winning performances in the time trial and team pursuit at the Pan American Games, and went on to win all four stages and the overall title at the recent Colorado Classic. At the time, she told Cyclingnews that her performance at the Pan American Games was the best since crashing over a year ago.

"I had that injury last year and a concussion, and I sat out and wasn't even able to go to the World Championships, missed the whole track season, so this was what I was training for this year," Dygert Owen said. "I took the beginning half of the season really slow and built up for this race, specifically."

She came into the race as a dark-horse favourite to contest for the rainbow jersey against the likes of two-time defending champion Van Vleuten and four-time silver medallist Van der Breggen. Dygert Owen's name is synonymous with track racing because she is a five-time world champion in the Individual Pursuit and the Team Pursuit. Although she won double world titles in the junior time trial and road race in Richmond in 2015, on the road scene, she is still somewhat more anonymous to her European rivals.

She had taken extended time off because of her injuries, and she doesn't compete in European road racing. Nonetheless, she was on Van der Breggen's radar heading into Yorkshire.

"Yes, she was [on our radar]," Van der Breggen said. "Annemiek did some track racing and we follow that discipline, too. I knew that Chloe was very good on the track and a good time triallist. So, yes, she was on my list of favourites."

Dygert Owen said that the wet conditions and the delay of the start to the elite women's time trial had no affect on her performance. She said she often trains in the rain because she lives in Washington State and is used to delayed events, which is common in track racing.

'I was very well prepared'

The women's 30km time trial started in Ripon and finished in Harrogate. It was relatively flat for the first 14km, and the climbing started just after the mid-race check point, followed by some technical sections on the run-in to the finish line.

"I rode it twice and I drove it a few times," Dygert Owen said. "I watch videos, too. I watched the boys [under-23 men] race this morning. I was very well prepared. When it went uphill … that was very hard."

Dygert Owen started fast. She caught and passed seven riders that started as much as eight minutes ahead. By the time Van Vleuten passed the mid-race check point, Dygert Owen was more than a minute faster. In the end, she finished the race with an average speed of 43kph and was 1:32 ahead of silver medallist Van der Breggen and 1:52 ahead of bronze medallist Van Vleuten.

Dygert Owen has attributed much of her success to her coach Kristin Armstrong, who is a two-time world champion and three-time Olympic gold medallist in the time trial. Asked if Armstrong gave her any words of wisdom before the time trial, Dygert Owen said that they had spoken over the phone on the eve of the race and she took heed of her coach’s advice.

"Last night we were talking on the phone and she said, 'One thing that I think about when I'm racing is whether I'm hurting as bad as everyone else.' That really stuck with me today. Every time I went up a hill, I thought, 'Let's just back it up a bit', but then I knew that I wasn't going hard enough. I need to go harder. That really stuck with me."

Dygert Owen is aiming to compete in the Team Pursuit, along with the time trial and road race at the Tokyo Olympic Games next August. Until then, she has made no plans to compete in Europe or for a European trade team on the road. She said that she would rather continue training specifically for time trials and pursuits.

"I definitely want to follow in Kristin's footsteps," she said of her coach who spent much of her career solely focussed on time trialling. "I would love to race in Europe, but my goals are in time trials and track events, and so as of now, I'm really focussed on those specifically. We'll see after Tokyo."

Asked in the post-race press conference what it meant to her to sit between two of the sport's strongest riders in the world - Van der Breggen and Van Vleuten, she said, "It's really special."

"I really look up to these girls, and it's neat to be able to share the podium with them – two phenomenal riders, and definitely people that I look up to."