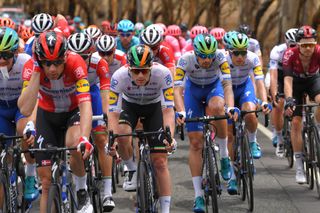 Irish road race champion Sam Bennett (Deceuninck-QuickStep) was left disappointed with second place on stage 4 of the Tour Down Under behind Caleb Ewan (Lotto Soudal) on Friday, suggesting that the final straight to the line in Murray Bridge was considerably shorter than he'd expected, leading him to mistime his sprint effort.

"It was a really good job by the guys. It's just that in the roadbook [the book of stage information given out by organisers at each major race], it said it was 300 metres to go from the final corner, but we came out and we already saw the 150 metres sign," Bennett lamented.

"I think if it was the way it said in the book, I think we would have got it."

Bennett again had a near-perfect lead-out by his new Deceuninck-QuickStep team in a high-speed and hectic finale, but then accelerated early, allowing Ewan to come through and win.

"Mørkøv wanted to wind it up, because it was meant to be 300 to go, but then I already saw it was 150 and so I went early," he explained, "and then it was kind of up, and then slightly down, before it kicked up for the last 20 or 30 metres, and I ran out of gears when I got over the crest. I had no more gears to keep pulling so Caleb came past," said Bennett, who managed to hold off Jasper Philipsen (UAE Team Emirates).

"You can't call it the perfect lead-out if you don't win," the 34-year-old told Cyclingnews. "But the team certainly set it up really well in the last few kilometres, and we had it how we wanted it until the last corner.

"We were a bit surprised about the short distance from the corner," Mørkøv admitted, "so Sam went straight out of the corner, more or less, with Caleb just in his wheel, and, yeah, Caleb was just the fastest."

Despite being up near the head of affairs when the peloton had to negotiate a rail crossing and a narrow chicane 1.5km from the finish, Mørkøv said he was only too aware of the chaos as the stage approached its denouement.

"I know it was a mess. We were here last week to check this finish out because it was one of the stages we had targeted at the race, so we knew the run-in really well, and we also knew that it would be a big mess," he said. "Thanks to our team, we could stay at the front and out of that kind of mess, and I think we had a very good run-in into the last kilometre."

Bennett and Deceuninck-QuickStep will get another – and last – opportunity to take a second victory on stage 5 from Glenelg to Victor Harbor on Saturday.

"I know that there's a hard climb before the final, but it's the same final we've done for a few years now," said Bennett, who's ridden the Tour Down Under twice before, with the Victor Harbor finish featuring on both occasions.

"Hopefully we'll get it right tomorrow."

Thanks to my @deceuninck_qst team for working so hard for me today and I am gutted to come real close without quite finishing the job, but I started my sprint a tiny bit too early. Full congratulations @CalebEwan. 📸 @GettyImages pic.twitter.com/tH0GFqJ0CeJanuary 24, 2020