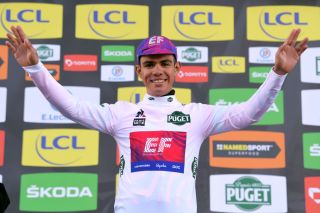 There is no such thing as a straightforward stage of Paris-Nice, particularly in an extraordinary edition such as this one, where seven WorldTour teams have absented themselves due to the risks posed by the spread of the Covid-19 coronavirus in Europe.

The combination of grisly March weather, crosswinds and exposed roads tends to lend menace to even the most unthreatening of parcours, and, in that respect, stage 2 to Chalette-sur-Loing was something close to a quintessential afternoon of Paris-Nice racing. Or, at least, as close as the peculiar circumstances of March 2020 can allow.

As tends to be the case on such afternoons, a number of lofty names suffered serious setbacks, chief among them home favourite Julian Alaphilippe (Deceuninck-QuickStep) and outright favourite Nairo Quintana (Arkéa-Samsic).

Their hard luck stories differ in the telling – a puncture for Alaphilippe, a crash for Quintana – but they circle around to the same conclusion, namely that both rolled home 1:25 down on stage winner Giacomo Nizzolo (NTT Pro Cyclng) and now find their hopes of final overall victory compromised.

In the overall standings, Alaphilippe is now 24th, 1:32 down on maillot jaune Max Schachmann (Bora-Hansgrohe), while Quintana lies 27th at 1:50. Time like that is easier lost than gained in the Race to the Sun.

Their respective misfortunes arrived shortly after the peloton splintered into echelons with 32km remaining, as the race hit crosswinds at Maisoncelles-en-Gâtinais. Alaphilippe punctured just as the race was splitting up and saw all of Sunday’s heavy lifting – when he stole a march on most of his GC rivals by making the winning move – undone as the air deflated from his rear tyre.

Quintana made the front group, only to come down in a crash with 25km remaining, borrowing the bike of his brother Dayer in order to complete the stage. He later found allies of circumstance in Alaphilippe and his teammates Kasper Asgreen, Zdenek Štybar and Michael Mørkøv, but with so many strongmen still collaborating in front, they could only hope to limit the damage and hope the wheel turns on the long road south.

Already winner of two stage races this year – the Tour de la Provence and the Tour des Alpes-Maritimes et du Var – Quintana will believe he has the form to make serious inroads into his deficit when the race hits the mountains at the weekend. Alaphilippe, meanwhile, will look to breathe life into his challenge with a strong showing in Wednesday’s time trial in his native Saint-Amand-Montrond.

While Alaphilippe and Quintana incurred the day’s most notable losses, yellow jersey Max Schachmann delivered yet another assured display at the head of the race to increase his lead atop the overall standings. He picked up a three-second time bonus at the second intermediate sprint in Puiselet and tried to tee up teammate Pascal Ackermann for stage victory from the 11-man group that contested the stage win.

Speaking on France Télévisions after the stage, three-time Paris-Nice winner Laurent Jalabert backed Schachmann – second in last month’s Volta ao Algarve – as a threat for overall victory, albeit with the caveat that much will depend on how he fares on the summit finish at La Colmiane on the penultimate day.

A redoubtable puncheur, a solid rouleur and a man backed by a remarkable Bora-Hansgrohe team, the German certainly looks well equipped to carry the yellow jersey deep into the race.

Schachmann extended his overall lead to 15 seconds and gained an additional 15 seconds on Thibaut Pinot (Groupama-FDJ), as well as amassing a healthy buffer on Alaphilippe and Quintana, but he will also be aware that some other danger men remain a little too close for comfort.

It was notable that Sergio Higuita (EF Pro Cycling) contested the intermediate sprint with Schachmann, picking up a two-second bonus for his troubles, and the Colombian champion was a most assured presence in the front echelon, thumbing his nose at the notion that a rider of his slender physique might struggle on a day such as this. For good measure, Higuita contested the sprint at the finish, taking 5th on the stage and picking up 3 seconds on Schachmann in the process.

"I also saw that EF did a good job and Sergio was also in the group, so on the climbs he will be a big competitor," Schachmann said afterwards.

One senses that might prove something of an understatement.

Still only 22 years of age and with half a season of WorldTour racing behind him, Higuita has made a remarkable start to life in the top division. A starting off 2019 at Fundación Euskadi but finishing it with a fine Vuelta a España stage win with EF, he has started 2020 with his national title and victory in the Tour Colombia. He now lies fourth overall, 23 seconds behind Schachmann, and the race has yet to reach his favoured terrain.

It was a good day, too, for Vincenzo Nibali and his Trek-Segafredo team, who were present and correct when the peloton fractured in the breathless final hour. Kuurne-Brussel-Kuurne winner Jasper Stuyven, world champion Mads Pedersen and the indefatigable Alex Kirsch were all prominent, while Nibali navigated the splits with a minimum of fuss to finish in the front group, leaving him 9th overall, 28 seconds off the lead.

"The situation in the general classification is good, but I'm preaching calm," Nibali said. "At the moment the most dangerous rival, rankings in hand, is Higuita. Also Pinot, who stayed in the first group for most of the stage, but he paid for his efforts and we managed to build up an advantage over him too. And I don't forget Schachmann either…"

A strange kind of race

The absence of seven WorldTour teams – including organising influences such as Ineos, Jumbo-Visma and Mitchelton-Scott – has undoubtedly exacerbated the open, almost chaotic nature of the racing seen thus far at Paris-Nice, but the curiosity of this year's race stretches beyond what is happening out on the road.

The measures enacted to help limit the prospect of coronavirus contagion have been tightened further even since the race began. Before stage 1, riders were already warned off fulfilling autograph and selfie requests. Now, after the French government imposed stricter regulations on public gatherings and sporting events, no fans are permitted at the start and finish areas at all.

There are now over 1,000 coronavirus cases in France, and it has already been confirmed that Paris Saint-Germain must play Wednesday evening's Champions League tie against Borussia Dortmund behind closed doors, while next weekend's Six Nations rugby game between France and Ireland has already been postponed. Paris-Nice continues for now, but Trek-Segafredo directeur sportif Steven de Jongh summed up the thoughts of many

"As long as they say it is safe for the wider public, we see no need not to race," De Jongh told ANP. "But I fear that could all change in a matter of days."