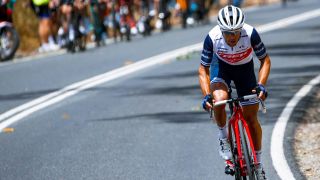 Now in his second season for Trek-Segafredo, the long-time king of Willunga Hill Richie Porte will be hoping to avoid a repeat of his 2019 campaign; a season which saw his only win coming courtesy of his sixth success atop Willunga at the Tour Down Under. From there on, an injury- and illness-stricken spring hampered the latter half of his season and dashed his Tour de France hopes where he managed a sub-par 11th place.

This year, Porte's made a strong start in his quest and has already surpassed his 2019 win tally, taking the win on stage 3 into Paracombe, and despite not taking his customary Willunga win - Plucky British neo-pro Matt Holmes put paid to that - Porte took his second overall victory at the Tour Down Under. His early-season success aside, Porte will undoubtedly be looking to continue in the same vane, in a bid to finally achieve the elusive Tour de France success that he's long been tipped for.

Below we'll run through all the kit that Porte has been using for the past week in his victory at the 2020 WorldTour season opener in Adelaide.

Porte's helmet of choice is the Bontrager Velocis MIPS, in Trek-Segafredo team colours.

In April 2019, Bontrager all but broke the cycling industry's small corner of the internet when they announced WaveCel, dubbing it the 'most important change in cycling in 30 years'. We're not here to dispute the claims, but it's generally accepted that the WaveCel material doesn't do the helmet any favours when it comes to ventilation.

With the searing temperatures commonly found during the Australian summer, it's unsurprising Porte's chosen to use the best-ventilated helmet in the Bontrager range. The Velocis MIPS, although designed to be airy, does see a few considerations otherwise found on an aero helmet. In addition, it uses a BOA for retention and features a sunglasses port for easy eyewear-stowing.

Somewhat awkwardly, Trek-Segafredo riders have paired their Bontrager helmets with KOO eyewear, the subsidiary sunglasses brand of the helmet manufacturer Kask, who themselves supply helmets to Team Ineos.

Porte has opted for the KOO Open Cube cycling sunglasses, which use a one-piece Carl Zeiss lens, and are unique by the way they fold. Rather than a simple folding mechanism, the Open Cube's arms rotate on a 360-degree axis.

Forgoing their own Bontrager brand of clothing, the Trek-Segafredo team kit comes from Santini. On race days, Porte has been using the Italian company's Tono jersey, which is a lightweight, short-sleeve mesh jersey - perfect for the Australian summer sun. The title sponsors, Trek and Segafredo Zanetti, are given prime real estate on the chest, and there are further sponsors listed on the arms and shoulders.

Pictured here ahead of the Schwalbe Classic Criterium, Porte has wrapped up a little warmer, using the team edition thermal training jersey to keep off the chill.

Even though Santini is a well-established high-end kit manufacturer, sometimes pro teams require just a little bit more, and that's the case here. Trek-Segafredo's bib shorts look to be a combination of Santini's different options, with the bib straps resembling those on the Redux bibs and the leg band comes from the Impact.

The chamois is the C3, and any outer-thigh seams have been removed to ensure the sponsors' logos can be displayed unobstructed.