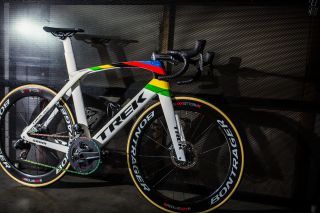 Less than six days. That's how long Trek had to create a bike fit for a world champion after 23-year-old Mads Pedersen's surprise victory in the World Road Championships in Yorkshire on Sunday.

From the late afternoon finale of the elite men's road race on Sunday, September 30, to the mid-day drop of the flag at the Tour de l'Eurométropole on Saturday, October 5, Trek had to conceptualise, design, paint, build and deliver a World Champion's Edition Trek Madone halfway around the world in time for Pedersen's next outing in Trek-Segafredo livery.

"As soon as Mads crossed the finish line, I started ‘pulling the levers’ internally at Trek HQ in Waterloo,” said Matt Shriver, Trek-Segafredo’s technical director. “First, I put a call to the Trek Race Shop to get the parts organised and pulled from Project One, and specific frames picked for the World Champion. Then I contacted the creative director, Brian Lindstrom, at Trek to inform him we need World Champion artwork ASAP.”

As Monday morning rolled around, the hangover from the previous day's celebrations still lingering, the next steps were already underway.

By Tuesday afternoon, the Project One World Champion Madone was resplendent in rainbows, replete with Trek-Segafredo team logos and a few signature touches – “All or nothing” and “Underdog” adorn the down tube, a testament to Mads’ achievement a mere two days prior.

“Then it was back to the Trek Race Shop for final checks and then everything was shipped to Belgium for arrival at the service course by 14:00 Thursday. It was built up by 18:00,” explained Shriver.

Six days was the target, but in an appropriate metaphor for Pedersen's earlier display of exceeding expectation, Trek delivered the bike in four.

With the wheels in motion at Trek HQ in order to get the custom Madone ready in time, Leslie Zamboni, the team’s clothing product manager, faced pressures of her own.

“At first, I was shocked by the surprise,” said Zamboni of Mads’ win. “Then, a bevy of phone calls started.

“The first point was working with Santini to prepare the design, checking all the rules in placing the logos in the right position, in the right dimension, and in the right color,” she continued. “Once that was done, the design was sent to the UCI through Matt Shriver. The UCI came back a day after with a request to adjust the space between the Trek-Segafredo logo and the rainbow – a very small adjustment, but it took away another day. So finally, Wednesday morning production could start.”

“Production worked really fast,” said Zamboni, “but after talking to Matt, we decided that it was safer if I took them personally from Santini to the race. So, Thursday evening, I picked up the clothing at Santini, and Friday morning, I flew from Italy to Belgium with the World Champion kit in my backpack.

“Yes, it was all a bit stressful,” she added,” but it was super nice to have this stress!”

The week's work was then delivered to the team’s hotel on Friday, October 4, one day before Mads’ first race as World Champion, the Tour de l'Eurométropole.

Unsurprisingly, Mads was beside himself with excitement. “When I got to the hotel this afternoon, I went straight into the truck to see my new bike, and it is absolutely amazing,” he said, “It’s so beautiful with so many details that make it so personal. I took it for a ride, the first one in my new kit, and everybody kept hitting the horn and taking pictures.”

Mads Pedersen won the Tour de l'Eurométropole in 2018, so for his first outing in his new World Champion jersey, he will wear race number one. A true testament to the talent of the young Dane.

“This is the best jersey in the peloton. I am so proud and honoured to wear it. I really can’t wait to race tomorrow!”

A world-class turnaround for a world-class rider: a fitting tribute to the performance of their new world champion.