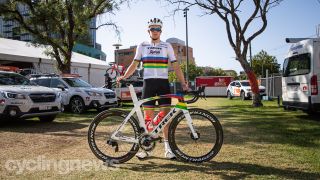 Battling through the wet and cold of the World Championships in Yorkshire, Mads Pedersen left everything he had on the uphill drag to the finish line and became the first Danish rider to earn the rainbow stripes.

Now if only the cycling world could learn to pronounce his name correctly — with a wry smile, he politely reminded us that the 'd' in his first name is silent.

This victory sent Trek-Segafredo's equipment sponsors into a frenzy, trying to get the newly crowned World Champion's kit ready for his start at Tour de l'Eurométropole a week later.

Pedersen is at the Tour Down Under, epitomising the role of teammate, battling in support of Richie Porte with the hopes the Australian can pedal his way to the top of the podium for a second time.

We've already taken a closer look at the Danish rider's rainbow-striped Madone, and now we'll have a gander at the rest of his riding kit.

Given the Tour Down Under is traditionally a scorching hot affair — in previous editions temps have climbed high enough to melt the tar in the asphalt — it's no surprise to see Pedersen and his Trek-Segafredo teammates reach for the better vented Velocis MIPS helmet. The Velocis technically occupies the 'light and airy spot' in Bontrager's helmet lineup, but still sees its fair share of wind-cheating design cues.

The Velocis features a BOA based retention system and the padding inside features materials made by Boulder Colorado-based 37.5 Technology, said to wick sweat more efficiently than a standard foam pad.

The Danish rider's eyewear comes from Kask, with Pedersen choosing the Koo Open Cube sunnies for his time in Adelaide. Carl Zeiss produces the sizable curved lens, and the Dane prefers the blue iridium lens to keep the Australian sun at bay. Being world champ, the rainbow bands feature on the frames, albeit subtly above his right eye.

The weather at this year's Tour Down Under has been comparatively mild, but in the middle of the day the temperature still hovers around 30C. In an effort to beat the heat, Pedersen has opted for Santini's mesh-based Tono jersey.

The main panels of the top are made from the Italian outfit's Sensia micromesh for ultimate wicking, while the sleeves are lycra to prevent the jersey from bunching, binding or pinching.

Santini makes a range of high-end bibs, but Trek-Segafredo race in their own specially designed Pro Team bibs which appear to be an amalgamation of the brand's shorts. The bib straps seem to be taken from the Redux, the leg band from the Impact, and keeping riders rear ends content is the brand's C3 chamois. The Pro Team shorts have a unique panel layout to prevent sponsor logos from having seams split them through the middle.

Pedersen is sporting a pair of to-this-point unreleased Bontrager Ballista cycling shoes. The Ballistas that are currently available to us mere mortals in this design come in a knit version.

Pedersen's shoes, on the other hand, are made from a more traditional microfibre upper but feature the same cable routing and IP1 dial on the back of the shoe — the perks of being the World Champ.

Garmin is a technical sponsor of Trek-Segafredo with the riders using a range of its computers; here Pedersen is using a Bontrager branded Edge 1030 with data fields for time, distance, speed, power, heart rate, cadence and time of day.