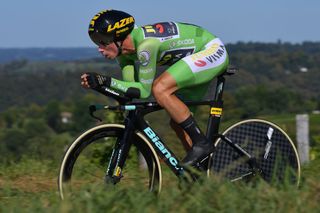 To shelter from the blinding sunshine before the start in Jurançon, Nairo Quintana fashioned himself a fortress of solitude in the Movistar equipment truck and warmed up for the time trial there. Miguel Angel Lopez – Superman to his admirers – stuffed an ice pack down the back of his skinsuit as he set off for the start house. The respite was temporary; once out on the road, there was no escaping the heat.

Primoz Roglic (Jumbo-Visma) was widely predicted to seize command of the Vuelta a España on the stage 10 time trial around Pau, and the forecast was right. The Slovenian duly scorched around the 36.2km course at an average speed of 46.1kph, and the hitherto tightly packed general classification has suddenly melted beyond recognition.

Just 20 seconds separated the top four in the overall standings before the time trial, but now Alejandro Valverde (Movistar) is the only rider within two minutes of the new maillot rojo Roglic. The world champion lies 1:52 down, while Lopez is now at 2:11 and Quintana is all of three minutes back.

When the Vuelta peloton reconnoitred the rolling course around narrow, Béarnaise backroads during Monday's rest day, it looked as though the early ascent out of Jurançon and the drag towards Saint-Faust might offer climbers like Lopez and Quintana some faint prospect of keeping their anticipated losses on Roglic to the bare minimum.

It was a forlorn hope. Once riders began tackling the parcours at full bore on Tuesday afternoon, it quickly became apparent that neither the dips and rises nor the twists and turns would do anything to scrub off Roglic's speed. His Jumbo-Visma teammate George Bennett's words on crossing the finish line proved prescient. "It looked like a climber's course, but it turned out to be a lot faster at race pace. It's a real power course," Bennett said, estimating that Roglic would gain "a minimum of two minutes on Quintana and Lopez."

So it proved. It wasn't altogether surprising that Roglic caught Lopez for two minutes inside the final kilometre – the Colombian had expected to lose "between 1:30 and 2 minutes" – but putting more than three minutes into Quintana must surely have exceeded even his expectations.

Quintana's performance in the maillot rojo in this time trial put one in mind of his ragged display in the maglia rosa in the strikingly similar Montefalco test on the 2017 Giro d'Italia when he lost almost three minutes to a rampant Tom Dumoulin.

Roglic's overall buffer on Tuesday evening, meanwhile, recalls the one enjoyed by his future teammate at this point on the 2017 Giro. The Vuelta hasn't reached its midpoint and the race is already his to lose.

Roglic has been here before, of course. In May, he took a commanding lead over his general classification rivals after a dominant display in the San Marino time trial on stage 9 of the Giro d'Italia and was feted by many as the race-winner elect. All sorts of variables can cascade without warning into a man's path at the Giro, however, and most of them fell Roglic's way in the days that followed.

He deliberately ensured he didn't retake the pink jersey after he and Vincenzo Nibali marked one another and ignored Richard Carapaz in the Alps. He lost his aura of impregnability when he endured a calamitous bike change and crash on the road to Como. He then lost any hope of winning the Giro when he fell ill in the final week, though he at least managed to salvage a podium place in Verona.

One imagines that Roglic and Jumbo-Visma will have learned much from the second half of that Giro, but the biggest difference between May and September appears to be the strength of the supporting cast around him. At the Giro, Roglic's game of chicken with Nibali came about largely because his Jumbo-Visma team had been weakened considerably by the abandon of Laurens De Plus.

On the Vuelta, Jumbo-Visma's strength-in-depth is such that the team looks better placed to absorb the untimely loss of Robert Gesink. In Andorra, Robert Gesink, Sepp Kuss and Neilson Powless all infiltrated the early break with an eye to supporting their leader late in the stage, while George Bennett – provided his Tour de France exertions don't eventually catch up with him – is a foil of the very highest quality.

Jumbo-Visma, in short, seem well equipped to carry the burden of the maillot rojo here. Roglic, meanwhile, downplayed the idea that he might fade in the second half of this Vuelta as he did in the Giro. "I'm just looking forward. I'll try to stay healthy and in one piece," he said on Tuesday evening. "I'm not so worried about that."

A Grand Tour is no longer a Grand Tour, it seems, unless there is confusion over the leadership at Movistar. Marc Soler's vexed reaction to being ordered to wait for Quintana in Andorra on Sunday at least suggested that the team's strategy may not, after all, be simply a homage to Alexander the Great, who, in lieu of a succession plan, reputedly left his empire "to the strongest."

Even so, one wonders if Quintana will enjoy quite the same privileges in the remainder of the Vuelta, given that he now stands 4th overall, some 3 minutes down on Roglic and 1:08 behind his nominal co-leader Valverde. Tadej Pogacar (UAE Team Emirates), meanwhile, is now just 5 seconds behind him. Indeed, no sooner had Valverde crossed the line in Pau than he was fielding questions about his status from here on out.

"To say I am leader, well, one minute more, one minute less, but we are all growing tired on the team about this question of who is leader and who isn't," Valverde said. "The two of us are going to do the best we can for Movistar, and that's it."

Quintana, for his part, declined to abdicate a share of leadership just yet, far less resign himself to Movistar falling short at the Vuelta. "We have to attack Roglic," he said. That much is obvious, and Richard Carapaz did it successfully at the Giro, but it remains to be seen quite how Movistar broach the matter here.