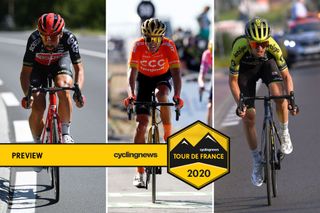 Time for a getaway: Cyclingnews’ eight riders you can expect to see trying to get into breakaways for the remainder of the 2020 Tour de France (Image credit: Getty Images Sport)

Getting into a breakaway at any professional stage race, let alone the Tour de France, is always a lot more complicated and hard-fought than simply pushing a bit harder on the pedals at the start of the day.

The agendas of teams protecting the leader's jersey – or points, mountains or young rider's garments – have to be taken into account, as do the position on the stage of the climbs and bonus sprints, and not least the position on the general classification of the rider, or riders, trying to get away.

But when everything falls in their favour, it tends to be the same dozen or so riders who know just how and when to get away, how to measure their efforts while out on the road, and then when to bury themselves and to try to make their advantage stick.

Here, we've identified eight riders at this year's Tour that we think will be worth keeping a close eye on from stage 12 on Thursday – a stage surely made for a day-long breakaway – and beyond, when the parcours tips in favour of the baroudeur riders.

The Belgian's form is impeccable, and with two top-five finishes already in this year's race, over varying terrain, the 35-year-old will no doubt be on the attack over the coming days.

He has won in the Massif Central, too, having claimed one of most emphatic careers wins in Le Lioran back in 2016, and the road to Sarran in the Corrèze department suits the Olympic champion perfectly, with its rolling terrain and its 218km length ideal for a diesel with a powerful punch after a long day in the saddle.

Van Avermaet has an eye for the right break, but if stage 12 doesn't work out, then stage 14 into Lyon also has the right profile for his skillset. Basically, anything apart from the pure Alpine stages, the time trial and the sprint into Paris are options, and Van Avermaet will be desperate to close out his long association with Contiuum Sports – the operation behind BMC and CCC – with a defining victory.

With Emanuel Buchmann's yellow jersey challenge over and Peter Sagan now looking unlikely to retain his green jersey, Bora-Hansgrohe will turn their attention towards stage wins.

They have a number of potential contenders in this regard, and Sagan could be one of them, but Schachmann is a rider worth watching. There were doubts about his shoulder coming into the race after an elderly lady decided to slow her car in front of the German during Il Lombardia, but ninth place on the stage to Nice suggests that he's recovering

The Paris-Nice winner can handle lumpy terrain, and his Giro d'Italia stage win in 2018 came late into the race, and at Prato Nevoso, no less.

Stage 12 to Sarran looks hard enough to distance the sprinters and their teams, but if the 26-year-old makes it into the right move, then almost all of the stages on offer in the second half of the race could be potential targets.

Like Schachmann, the Frenchman has seen his leader fall by the wayside in the battle for the yellow jersey, and like the German, the 23-year-old climber is a prime candidate for a breakaway on any of the remaining mountain stages if he has recovered from his own stage 1 crash injuries.

Marc Madiot's team entirely revolves around stage wins at this point as it looks to save its race after Pinot's back injury and capitulation, and Gaudu already showed some intent on stage 9 when he infiltrated the move that tried to catch Marc Hirschi.

That break seemed tentative to say the least, but there will be times – especially in the third week – when the GC teams will be reluctant to chase for half a stage, and that's where Gaudu could profit.

He sits far enough down on GC, and he won a demanding stage against some of the best riders in the world, including Primoz Roglic, at the Tour of Romandie last year.

The 2016 Tour de l'Avenir winner also finished second in the white jersey last year, and while that boat has sailed for another 12 months, he can go into the second half of the Tour with a huge degree of freedom.

As for Pinot, who knows? If his back improves, then a stage win is possible, but putting hope in his performances tends to only lead to heartache.

With Adam Yates now out of the yellow jersey, Mitchelton-Scott can return to their pre-race objective of winning stages.

That might still happen with Yates, who clearly has enough form to challenge if he drops further out of the overall classification battle, but Mikel Nieve is probably the safer bet considering he hasn't had to spend several days riding defensively to maintain a slim lead in GC.

He also has a formidable record when it comes to stage hunting, with three wins in the Giro and one in the Vuelta to his name. Granted, the form hasn't exactly been formidable early on, but he's been working for Yates, and if there's one thing you can guarantee with Nieve, it's that he always comes good in the third week of a Grand Tour.

All of his Grand Tour stages wins came from stage 13 onwards, and he just has an incredible eye for the right break. We shouldn't write off Daryl Impey, either, who looks on form, but we've limited ourselves to one rider per team.

EF Pro Cycling aren't just going to focus on Rigoberto Uran's top-10 finish in Paris. This is a team that's still brimming with talent, and after a day's rest and two days better suited to the sprinters, the American team can gather itself ahead of more testing terrain.

The American team has plenty of options when it comes to stage-winning potential, but Dani Martinez doesn't quite have legs to match his desire after his early fall, and Sergio Higuita is still too close on GC to be allowed too much leeway from within the peloton.

Neilson Powless has come close on two occasions, and can't be ruled out, but the one rider who clearly has good legs but has drifted on GC is Hugh Carthy.

He's racing in his debut Tour, but he rode himself into the second half of last year's Giro before finishing 11th on GC, while his stage win at the Tour de Suisse a few weeks later was arguably the best ride of his life.

Unlike Powless, it's hard to imagine Carthy going into multiple breaks in the second half of the race, but if he has one bullet, then wise old Charly Wegelius – EF's head directuer sportif – will make sure that he uses it wisely. The only doubt lies in the injuries he's carrying after a fall that saw him take a whack to his left elbow.

The obvious Deceuninck-QuickStep pick would be Julian Alaphilippe, and he might yet win another stage, but as Andy Schleck alluded to on the rest day, not many riders are going to give the Frenchman a turn if he latches onto a break. He's too quick and too good at going uphill, and frankly too dangerous to collaborate with.

Alaphilippe stands a better bet – potentially – of jumping clear of the GC group in the closing stages before the overall contenders start knocking each other about.

Step forward Jungels. He's ridden most of the Tour in defence of his teammates, but on stage 11 he showed glimpses of the horsepower that's under the hood with a late attack. Unlike Alaphilippe, he'll have far more freedom in the peloton.

Jungles doesn't have the climbing legs that helped him to a stage victory at the Giro d'Italia back in 2017, but every now and then the 27-year-old comes up with a performance that  reminds everyone of his class. Why not at the Tour de France?

You didn't think we'd leave De Gendt off our list did you?

There's no guarantee of winning a stage in a race like the Tour de France, and De Gendt's reputation is such that he has to work twice as hard to go clear, because almost every time he even inches to the front, a dozen riders are fighting for his wheel, but the 33-year-old is a sure thing when it comes to breaking away.

However, with Caleb Ewan already having won two stages and with few sprint prospects in the days ahead, De Gendt can toss aside his babysitting duties and start to have some fun.

Like Van Avermaet – who beat him from a break back in 2016 – De Gendt can target a number of stages between here and Paris, although he may also fancy a crack at some of the Alpine stages, too. He revealed he was suffering with back pain in the early days of the Tour but is surely only waiting for the right moment to attack.

Ineos Grenadiers' Pavel Sivakov was pencilled in for the last place on our list. His condition appears to be improving, but it's unlikely that Ineos will throw him up the road unless it's to work for Egan Bernal deep into the mountains. At some point Dan Martin (Israel Start-Up Nation) and Warren Barguil (Arkéa-Samsic) will surely make long-range moves, but Marc Hirschi gets the nod for our last of the magic breakaway 8.

His teammate Søren Kragh Andersen is another potential candidate, but anyone who saw Hirschi on the stage to Laruns will have seen the depths to his class as a bike rider. Whether it's on the flats, the climbs or on the descents, he looks irresistibly smooth.

He's never raced longer than a Tour de Suisse or Tour de l'Avenir, and the third week might see his undoing to some extent, but we've probably not seen the last of the 22-year-old who already has a second and third place to his name at this year's race.