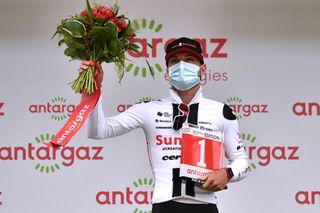 The Tour de France can be cruel. If two of the three under-25 year-olds in the first group to reach the finish line on stage 9 on Sunday had significant reasons to be satisfied with their outcmoes in Laruns, then the third, 22-year-old Sunweb rider Marc Hirschi, could feel only the bitterest disappointment.

While Egan Bernal (Ineos-Grenadiers) moved up too second overall and Tadej Pogačar (UAE Team Emirates) won the stage, Hirschi's third place – his second podium of the race – came after a 90-kilometre breakaway which collapsed almost within sight of the line, a massive blow.

After being reeled in by a GC group made up of Bernal, Pogačar, Primož Roglič (Jumbo-Visma) and Mikel Landa (Bahrain McLaren), the former Under-23 World Champion battled hard to stay on terms, and battled on to a sprint finish.

However, despite making a strong acceleration to the line, he was superseded by a Slovenian sprint sandwich, with Pogačar on one side, and Roglič, en route to yellow, on the other.

"It's been a really tough day," was the first thing Hirschi said after his lonely day out front, which saw him enjoy a four-minute gap at one point before cresting the Col de Marie Blanque 15 seconds up, flying down the descent and getting caught 2km frmo the line.

"Today was not like yesterday where they gave time to the breakaway so it was a bit shit," he added. "For sure, I'm super happy with my performance and how it went. But now it's two times really close and once again I got beat so close, so it's not nice.

"On the last climb, I had time, I persevered, and I'm sad I couldn't get away. It's all ended up being for nothing.

Hirschi had already been in one breakaway en route to Nice on stage 2. He got away with Adam Yates (Mitchelton-Scott) and Julian Alaphlippe (Deceuninck-Quick Step), but would settle for second, there too.

As for Sunday in the Pyrenees, "In the last few kilometres, my team car told me to wait, because I'm not bad at sprinting. So I had hoped to have a chance of winning even after I was caught. But I'll just have to soldier on."

Team Sunweb coach Matt Winston struck a more upbeat note about his young charge's ride, stating that his ride on Sunday has given a taste of what he's capable of in the future.

"I think that all-round it was a super effort. He's come from our development team and worked his way up, making a really nice progression," Winston said.

"He's super disappointed but he's shown what the future holds."