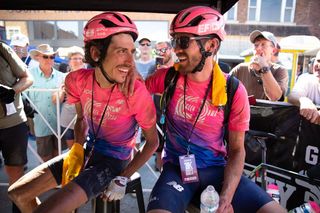 Considered by many as the Tour de France of mountain biking, the Absa Cape Epic represents the ultimate test for any professional mountain biker.

With valuable UCI ranking points on offer and the fact that it's the most televised mountain bike race in the world, the event attracts an impressive international field every year including Olympians (both former and current medalists), world and national champions, and WorldTour road riders.

The 2020 edition of the race isn't any different with defending champions Nino Schurter and Lars Forster of Scott-SRAM MTB-Racing looking to add another title to their collection. They will be joined on the start line on March 15 by last year's runners up, Manuel Fumic and Henrique Avancini of Cannondale Factory Racing, and Damiano Ferraro and Samuelle Porto of Trek-Pirelli.

Cape Epic: A hat trick of stage wins for both men's and women's leaders

Five-time winner Karl Platt and decorated marathon racer Alban Lakata (Bulls Legends) can't be written off either, despite a tepid 2019 campaign that saw the Bulls Heroes back-up team finish above them on the general classification. With an additional back-up team in tow – the Bulls Youngsters – veterans Platt/Lakata have a plethora of resources to call on should they find themselves in yellow. And while 2018 champions Jaroslav Kulhavý and Howard Grotts of Ninety One-songo-Specialized will be considered a threat, many will recall how Grotts suffered day in day out at the hands (read legs) of Kulhavý.

The Cape Epic has a long history of attracting road racing professionals, with current Team Astana rider Jacob Fulgsang having won the race in 2009 together with Roel Paulissen.

Fulgsung isn't the only road rider to have secured overall honours – Anna van der Breggen traded her skinny wheels for knobby tyres and put in a dominant performance last year that saw her and Investec-songo-Specialized teammate Annika Langvad decimate the women's field in spectacular fashion. This year sees a throng of road and cyclo-cross riders take on the challenge, including all-rounder Tom Pidcock, who teams up with Florian Vogel.

However, it's the EF Pro Cycling darkhorse duo of Alex Howes and Lachlan Morton that could very well play a significant role as to how the race unfolds over the 647km/15500m eight-day route.

For the EF Pro Cycling team to excel, the conditions would have to be perfect, especially when you consider the untamed, unforgiving and desolate terrain found across South Africa's Western Cape region, especially with the 2020 Cape Epic route set to be one of the toughest in recent memory.

Throw in the mercurial weather and beautiful-but-often-hostile native flora and fauna and disaster can strike at any moment. Who can forget Robert Mennen's (Topeak Ergon) race-ending collision with a duiker (antelope) on stage 1 of the 2013 edition, resulting in a broken clavicle?

Anything can happen. Morton's and Howe's success then will hinge around how they nurse their equipment and approach the more technical stages.

'I don’t expect us to be anywhere near Nino'

While Morton has described Howes 'as a mad man' who has the ability 'to mix it with the front guys on the rough stuff,' he too possesses exceptional handling skills as well as the endurance to go the distance on the longer stages. Both riders have taken a keen interest in EF Pro Racing's alternative racing calendar and subsequently competed in a litany of gravel races that included GB Duro (won by Morton), Dirty Kanza and Leadville 100.

The Epic, however, is a completely different kettle of fish.

If anything, it's more the lack of intimate terrain knowledge of the region that could hamper the EF Pro Cycling pair's potential and progress at this year's race. Mechanicals and punctures don't discriminate at the Cape Epic; ask Schurter and Forster. At last year's race the Scott-SRAM pairing lost over nine minutes after a rear-wheel puncture on stage 3 saw them concede their overall GC position to Cannondale Factory Racing. Thankfully, their back-up team, DSV-SCOTT-SRAM, were in close proximity and helped limit the damage in a move that would essentially save their race.

EF Pro Cycling will be under no illusions as to how tough it will be at this year's Cape Epic and will need to tailor their strategy accordingly. They have no back-up team despite sharing the same equipment and all-new Cannondale Scalpel-Si full-suspension mountain bikes with Cannondale Factory Racing.

While Morton doesn't expect to be jousting at the sharp end of the race, he has alluded to the fact that he and Howes will give the race a proper go.

“We are pretty close and got a feel for that in Leadville and Dirty Kanza. If there is any guy on the team that I want to go to Cape Epic with, it's Howes," Morton said.

"I don’t expect us to be anywhere near Nino, and it’s stupid to think so, but if a pro or former pro pins a number on, you better believe that if they can go full gas, they will."

If all goes well and the gods do indeed smile down on them, the EF Pro Cycling pairing may perhaps win a stage or two, especially on the longer, less technical days such as the stage 2 94km/2,050m traverse from Ceres to Tulbagh and the stage 4 101km/1,950m 'move day' in which the race travels from Tulbagh to Wellington.

The 2020 Cape Epic is scheduled for March 15-22 over what is traditionally the Western Cape's hottest period.