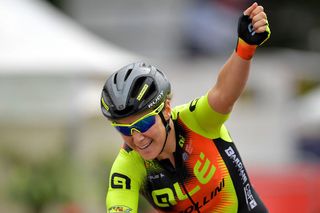 Australian Chloe Hosking is the first rider from outside North America in more than five years to race for the Rally UHC men's and women's teams, and the 29-year-old sprinter brings a deep set of palmares to what will be her sixth team in her 11-year professional career.

The Rally UHC women are counting on Hosking's experience to help mentor the team's younger riders while she continues to add more lines to her list of wins. It's a double-sided blade that Hosking and the team are both hoping will pay big dividends throughout the year.

"It's no secret I've been around for a while, so I'm a veteran when it comes to women's cycling," Hosking told Cyclingnews Thursday in Minnesota, where Rally UHC is gathering for an official team presentation on Friday.

"I do bring a lot of experience, and having the opportunity to try and mentor and help some of the best North American young talent grow is something I'm looking forward to, and I do believe that I can bring a lot to the team in that area," said the rider who is coming to the American team from three years with Italian squad Ale Cipollini.

"What might have been stopping me from offering that so much in my other team is the language barrier," she said. "So I'm really looking forward to being able to easily communicate with my teammates. I think a lot more of what I have to offer will be able to get across and be used really valuably."

Hosking mixes business with backpacking holiday at Tour of Guangxi

Hosking has compiled 33 professional wins during her career, which started in 2010 with Team Columbia. Turns at HTC-Highroad, Specialized-Lululemon, Hitec Products and Wiggle Honda led to three years with Ale Cipollini. Among her 33 victories, she's claimed Women's WorldTour wins at Tour of Chongming Island, the Giro Rosa, La Course by Tour France, the Women's Tour, Tour of Norway, La Madrid Challenge and Tour of Guangxi.

Despite being the most decorated rider Rally has put in one of the orange-and-blue kits, Hosking said she sees her role in the team as having less pressure to perform than she has been used to, and she's looking forward to making that work to her advantage.

"For the past couple of years it has been quite a high-pressure environment," she said. "I think Rally are coming on knowing that I'm capable of winning big races, but what they're really interested in is the experience I bring and the on-road leadership I can bring to the young, talented girls they have coming through.

"So in that respect, I actually don't feel any pressure, and it's quite a nice feeling," she said. "I do feel that when I go into races with a little bit of pressure pulled off, that's actually when I have my best results, so I'm looking forward to that environment this year."

Hosking is relishing the chance to pass on her experience, but at 29 she believes her best years are still ahead of her, and she told Cyclingnews she's not coming into the season without her own ambitions.

The Rally UHC women will start their season at the Tour Down Under this coming January, followed by a slate of Australian races to kick the season into gear. It's the perfect place for Hosking to start her new endeavour.

"I love winning at home, and I think it will be really special to bring the girls to Australia and we start really strongly with wins there," she said. "I think we're more than capable of achieving that with both myself and other girls. We've got some great climbing talent, and I feel like the girls are going to come to Australia ready to race, and they can leave me for dead on the hills."

Despite laughingly downplaying her own chances in the Australian opener, Hosking will be on familiar ground racing in front of friends and family, so it would be a mistake to count her out of potential results.

"What's so great about the racing in Australia is that all the race organisers are really pushing for gender equality, so you go in and you don't feel like an afterthought," she said.

"You really feel like these races are here for us, and they put on a great event. The prize money is fantastic, so I think it adds a bit of motivation and just grit in the stomach to have some really good results there," she said. "The North American girls will be there for a month, which is nice to get out of the winter and get some training in. It's a good way to set the foundation for the rest of 2020."

Hosking travelled from her home in Australia to chilly Minnesota this week to meet her new teammates, staff and management, a trip she says has given her a renewed boost of motivation.

"It's a long way to come from Australia for a few days, but I think it's definitely worthwhile to get into the new team environment, meet everybody and meet new sponsors. It adds a bit of motivation to meet up with your teammates, see how they're going and where they're at, and then go from there," she said.

Hosking is also hoping to make the selection for Australia's four-woman squad at the upcoming Tokyo Olympics Road Race in July, although she admits the competition will be fierce to make the squad.

"We have Amanda Spratt, who is a stand-out favourite," Hosking said. "She's medaled at the world championships the last couple of years, so I'm going to try and put my best foot forward and make a case to get selected. If I don't, then I'm still going to be in great shape to win bike races for Rally. So either way, there's no harm lost in trying to get selected. So I'm going to go for it. Why not?"

As for the course in Tokyo, Hosking said she expects a difficult race, but one that is open to more potential winners than the world championships course in Yorkshire provided, or the course for the 2016 Olympic Road Race in Rio.

"I don't think it's as tough as Yorkshire for the world championships, but it's a lot of climbing and it will be really hot. It's a Classics-style course, so it's going to be interesting. It will be a dynamic, open race, so you need to take a team that reflects that, and that's where I would see myself fitting into the Australian team.

"What's great about the Olympics course is that 20 to 25 women could potentially win that race," she said. "Whereas these other races that are so selective, like the Rio course, there were only five women who could win that race. So that's what's exciting about the Tokyo Olympics."

At 29, Hosking said thoughts of retirement have started to creep into her head, although she told Cyclingnews 2020 definitely won't be her final year.

My husband seems to think I can keep going until the Paris Olympics [2024], but I'm not sure about that," she said. "It seems like a long way away, but I would only be 34. So it's not too old to finish your cycling career. There's plenty of science that shows women get stronger as they get older, so I feel like I'm still coming into some of the best years of my career, and I'd really like to show that this year with Rally."

She has been planning for life after cycling, however, as she continues to balance work toward a law degree along with her racing and travelling.

"It's going slowly, but I'm getting it done," she said. "I'm quite mindful about life after cycling. I know I'm not going to make my millions, or even hundreds of thousands, in cycling, so I want to make sure I have sort of something lined up post cycling. I did an undergrad in journalism and started my post-grad or Master in Law a couple of years ago now.

"I'm in no rush to get it done," she added. "I just want to have it done by the time I finish cycling. I'm pretty fortunate that the online learning in Australia is really great, so I've done everything online."

In a notion that seems counterintuitive at first blush, Hosking said her studies benefit her cycling rather than detract from it.

"I actually find it really great, because cycling can be very consuming and you just get overwhelmed with the cycling bubble, so to have that sort of thing to bring you out of the bubble can refocus you and also give you a routine if all you're doing is training," she said.

"I find that it really compliments my cycling, and of course I time my study periods for when I don't have major events coming up because then it's just too much. You want to be able to focus on your training and your preparation and not have to worry about that thing. So it's a balancing act, and I've been at it for a while now."