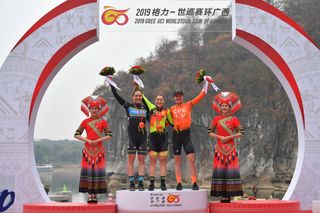 Chloe Hosking (Alé Cipollini) won the Women's WorldTour finale at the Tour of Guangxi on Tuesday thanks in part to an unusual preparation. As the one-day race in China came several weeks after the Australian's last race in Europe, Hosking combined it with a family holiday.

A week ahead of the race, Hosking travelled to China where she was joined by her father from Australia. Together, the Hoskings spent five days exploring the karst mountains of Guangxi on a bike-packing trip.

"It was fantastic," Hosking said. "Everybody else was like, it is a long way to come for one race, but I made the most of it. It is strange for the women's peloton to have a race this late, but I think it will become more normal. If they add, for example, a Lombardia for the women, it prolongs the season."

The race took a while to get going, with a single escapee given a long leash as the peloton was taking its time on the first flat half of the race. "I thought everybody was protesting about having a race in late October," Hosking said half-jokingly.

"But then they went all-out on the climbs, CCC were trying to drop as many people as possible. I got over the first climb right on the back of the peloton and then lost some distance on the second climb."

Hosking: Concussion can be worse than broken bones

In this situation, Hosking's recently-acquired local knowledge, having ridden the same roads just a few days before, made the difference. Once she had come back to the front, the Alé Cipollini team supported their sprinter, and Hosking beat Marianne Vos (CCC-Liv) and Alison Jackson (Tibco-SVB) in the sprint.

"I was with a good group, and I knew the descent from our bike-packing trip. I used the descent to get back into the main peloton, and then from there the team just committed to the sprint. The girls were fantastic, Eri Yonamine guided me in the last ten kilometres, then Soraya Paladin took over with one kilometre to go. Vos opened her sprint quite early. I jumped on her wheel and was able to come around her."

The victory comes at the end of a season in which Hosking wasn't performing at her best. After stage wins in the Tour Down Under and Herald Sun Tour, she went into the spring campaign overtrained. Having rebuilt her form for the summer, the 29-year-old then suffered a concussion in a crash in the RideLondon Classique and had to cancel her participation in the inaugural Women's Tour of Scotland.

At her return to racing, she just missed out on a stage win against Vos at the Ladies Tour of Norway before finally winning sprint stages in the Premondiale Giro Toscana and Madrid Challenge.

The victory in Guangxi means that Hosking had finish the season on a high. "I'm really thrilled, it hasn't been a great season, but it is a big relief to finish off like this, a nice way to close the book on 2019 and look forward to 2020."

After three years with Alé Cipollini, Hosking will change teams for next season, having signed with American team Rally UHC for 2020.

Cheers to us! Our second bike packing trip together and we’re still talking. I’d call that a success! Fantastic five days touring around Guilin and Guangxi with Dad. 11/10 would recommend. Chloe Hosking