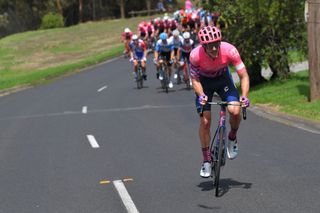 EF Pro Cycling’s Jonas Rutsch is chased down by the main field after going on the attack at the 2020 Cadel Evans Great Ocean Road Race (Image credit: Getty Images Sport)

"He's impressed a lot of people," EF Pro Cycling sports director Tom Southam says of new 2020 signing Jonas Rutsch, speaking at the recent Herald Sun Tour. "He wasn't one of those guys who was a super-prolific winner as an under-23 rider, although he obviously won races, but the things we'd heard about him were really positive – about how strong he was."

The German youngster turned 22 during his time in Australia last month, beginning his season at the Tour Down Under and the Race Torquay, and, in February, taking on the Cadel Evans Great Ocean Road Race and the Herald Sun Tour. As Southam tells Cyclingnews, Rutsch made a lasting impression thanks to his strong, attacking riding, culminating in him being part of the main breakaway on the penultimate stage of the Sun Tour to Mount Buller, where he was the last man standing from the break on the climb up to the finish, and was only caught with 3km to go by the 'real' climbers as they swept past to contest the victory.

At one point, after puncturing, mid-stage – and receiving a nevertheless excellent disc-brake-wheel change from the race's neutral service – Rutsch clocked 101.5kph on a descent, according to Strava, to make it back to the front group of six other riders, almost going straight on past them, and demonstrating a calmness and ability way beyond Rutsch's 22 years.

The towering 6'5" German rider somewhat nervously uses his almost-perfect English to tell reporters at the end of the stage how it all unfolded, and how he ended up with the red jersey as the day's most aggressive rider.

"I just gave it a try today, and I'm pretty satisfied with my job. It was a little bit weird how far I was able to go in the end, but I'm happy," Rutsch smiles. "I know that I'm not the worst climber, and not the best, but when you're in a breakaway, there's a chance, so that's what I did today."

Asked about his aggressive racing during this Australian summer, which also included him being part of, and working hard in, the large, 26-rider breakaway that survived to the foot of the final ascent of Willunga Hill on the final stage of the Tour Down Under, and then the following week attacking from a six-man breakaway on the penultimate finishing circuit at the Cadel Evans Great Ocean Road Race, Rutsch says that it's "just my style of racing".

"I'm just preparing myself for the Classics, and I think that's the best way," he continues. "It's been a great start to my first pro season here in Australia, and I'm pretty happy about it.

"I've just been doing my job – in the lead-out sometimes, and sometimes in the breakaway – and yes, sometimes as a climber," laughs Rutsch.

'The kid is a machine'

Where, then, has Rutsch come from? You may already have read about his background in Cyclingnews' 'Introducing' series from EF Pro Cycling's December training camp: how he won last year's under-23 Gent-Wevelgem while riding for the Team Lotto-Kern Haus squad, and how his father went to the same East German boarding school as Jan Ullrich and Jens Voigt.

His start to the new season points towards a glittering future at the Classics – one which, even before he began racing in Australia this season, his new team manager, Jonathan Vaughters, said could include winning Paris-Roubaix one day.

"The kid is a machine," said Vaughters upon securing Rutsch's signature last summer. “A well-tuned machine, like Arnold Schwarzenegger in The Terminator.

"He's a big rider that seems to climb well," he said, prophetically, "and go over cobbles well – and, from what I've seen, he handles pressure well, too.

"I think he's going to be a great Classics rider. I mean, he won [U23] Gent-Wevelgem, and I believe he's a future Paris-Roubaix winner."

'It doesn't really feel like these are his first races'

As Southam adds, Rutsch has been learning his job while at the variety of races on the Australian summer programme – and it's been a steep learning curve, too, the sports director admits.

"The work he's been doing is quite hard work – coming towards the sprint finishes, for example – but, already at the Tour Down Under, he was performing at a high level," says Southam. "Here, at the Sun Tour, he climbed a lot better than anyone thought he would, and I kept that in the back pocket, and tried to keep him close [on the GC]. He was only two minutes down after the first hilltop finish on stage 2, so he could do something to make the race more stressful, which he did, and so the fact that he can adapt to all sorts of different things, like doing the lead-out, hanging on a bit longer in the mountains – that kind of thing – is really good to see."

Rutsch seemingly has, Southam tells Cyclingnews, a mature head on his shoulders, which is set to serve him well at the upcoming spring Classics, where history has shown that such maturity – and, ideally, experience – tends to trump any kind of youthful exuberance.

"It doesn't really feel like these are his first races. I kind of forgot at one point: when he made a few little mistakes at the Tour Down Under, I had to remind myself that this kid had only done a few actual race days. So it's a really great start," Southam says.

"I think, for me, joining EF was the best decision," says Rutsch, who will begin his Classics campaign at the Omloop Het Nieuwsblad on February 29. "Everything seems really familiar, and I'm just really happy to be part of the team."