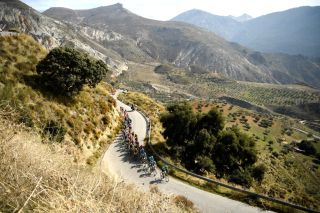 The peloton roll through the Andalucían countryside in 2019 (Image credit: Getty Images Sport)

Who said early season races were 'preparation races'? The 66th edition of the Vuelta a Andalucía, or Ruta del Sol, looks set to be one of the hardest of recent history, with three out of the five stages heading deep into the mountains of southern Spain, a difficult final time trial, and only one, unlikely, opportunity for a bunch sprint.

Spain's most venerable early season stage race – albeit with various gaps and changes of name, Andalucía began way back in 1925 – used to be an event where  sprinters and Classics specialists would sometimes find they had as much of a chance of winning as the mountain men.

Thanks to its unpredictable and varied route in a region with a huge range of terrain on offer, riders with the Vuelta a Andalucía in their palmares range from Spring Classics giants of the ilk of the late Rudi Altig, Freddy Maertens, Óscar Freire and Erik Zabel to climbers and stage race contenders like Julian Gorospe, Miguel Angel Peña and the all–time record holder for victories, Alejandro Valverde (Movistar Team).

Even the  former multiple World Time Trial Champion – although also a fine climber on his day – Michael Rogers of Australia once won Andalucía.

However, in recent years route-wise Andalucía's pendulum has swung firmly away from the 'flat–earthers' and this year's five-stage race once again has far more in common, say, with the Tour des Alpes than the BinckBank Tour.

In 2020, Andalucía visits no less than three different, difficult mountain ranges in five days. There's an incursion into the Sierras of Grazalema – home to some of the rarest vultures in Europe, birdwatchers will be pleased to note – in the south-west on stage one, a long grind across Sierra Magina in the east on stage three and a short dash over the foothills of the mighty Sierra Nevada on stage four.

This last mountain range has become something of a fixture in the race and is also famous in the cycling world for its altitude camps.

Intriguingly though, for all the clmbing, none of the five stages has a summit finish. Rather, stage one culimates with a lengthy first category ascent, the 12-kilometre Puerto de las Palomas, prior to a fast descent to the mountain town of Grazalema and a final kick up through its narrow streets.

Stage three, arguably the hardest of the entire race with more than 3,000 metres of climbers, has two first category climbs and a steady but tricky second category ascent in the last, very lumpy, 20 kilometres to the stunningly beautiful Renaissance city of Úbeda.

Then stage four's decisive ascent to the Alto del Purche near Granada has frequently been used in the most recent editions of Andalucía, but its seven kilometres at a brutally difficult average of nearly nine percent will be no less easy as a result of its familiarity.

As if that was not challenging enough for so early in the season, Andalucía will finish with a time trial challenge on the final day in the coastal resort of Mijas – which will have added interest as it is one of the first tests against the clock of 2020.

Only 13 kilometres long, stage five's time trialling terrain in the town famous in Spain for its 'donkey-taxis' is difficult and technical enough to see another change of leader, assuming no single rider is yet dominating an exceptionally tough route.

On paper, the most likely winner could emerge from one of four teams – Astana ProTeam, Mitchelton-Scott, Bahrain-McLaren and Movistar – although, apart from the usual unpredictable nature of early season racing, each of these squads has some question marks against its name.

Last year, Astana chief Jakob Fuglsang's first victory of a standout season was the overall of Andalucía after he went clear behind stage winner Simon Yates on the Sierra Nevada stage to Granada.

But in 2019, Fuglsang already had two races in his legs before starting Andalucía, so he may be a little ring–rusty at this point in the game. If so, team-mates Ion Izagirre  – who was in great form in Andalucía last year – or the new kid on the Astana block who recently shone in the Tour de Provence, Aleksandr Vlasov, are both potential plan Bs for the Kazakhstani outfit.

Bahrain-McLaren are in a similar situation, given their stand-out figure Mikel Landa, is also making his debut in Andalucía so may have uneven form, but they too have plenty of other options on the Andalucían table.

Belgian climber Dylan Teuns, fifth in the recent Volta a la Comunitat Valenciana and winner of multiple week–long stage races in the past, is one option, Matej Mohorič is capable of pulling out some exceptional breakaways like in the Tour de Pologne last year, and Pello Bilbao is one of Spain's quiet achievers on the climbs, with two stage wins in the GIro d'Italia last year.

With his fast finish all–rounder Sonny Colbrelli, too, could well be Bahrain-McLaren's option for Andalucía's one possible sprint stage  into Iznájar on Thursday, or for a long-distance break.

Squad-wise, Movistar and Mitchelton-Scott are the other two main contenders. Spain's only WorldTour team is racing on home terrain, but without their multiple Andalucía winner Valverde.

Instead, Enric Mas or, more likely, an in-form Marc Soler could challenge the field, whilst Mitchelton-Scott's options will probably be built around Jack Haig, who recently took second overall in the Volta a la Comunitat Valenciana, which he also led for a day. That said, team-mate Mikel Nieve rarely delivers a poor performance when the roads steepen, either.

However, on a course as tough as this, its the climbers and GC contenders who will be making most of the running in Andalucía this year.