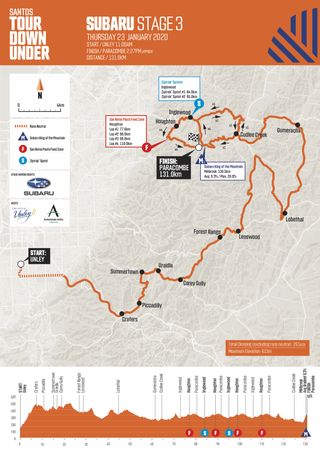 Stage 3 is one for the climbers, with the uphill finish at Paracombe back on the race, with the riders following a 131km route from Unley (Image credit: Tour Down Under)

When this was previously used, Cadel Evans and Richie Porte were shadowing each other and Rohan Dennis ended up winning. The riders will end the stage by doing laps around Paracombe and it's a brutally hard finish. The difference between here and Stirling is that this will definitely be a stage for the GC riders. The climb to Paracombe isn't as hard as Willunga Hill, and it's shorter, but it's steep and it's going to blow the race apart. If a rider takes 10 seconds here then they're in the box seat for the rest of the race.

A crucial point comes when teams start to position themselves at the front ahead of the final climb to the line. You come down through a valley and turn right at the foot of the climb. Riders can be struggling at the back at that point and expect to drag themselves back into contention as the climb goes on, but that effort will cost you. Bringing this stage back into the race means that it's not all about Willunga.