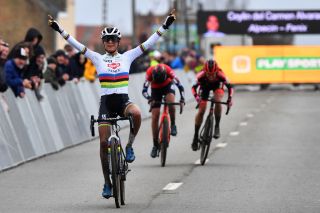 World champion Ceylin Del Carmen Alvarado (Alpecin-Fenix) won the final round of the Telenet Superprestige in Middelkerke to take overall victory in the series, beating Denise Betsema (Pauwels Sauzen-Bingoal) and Annemarie Worst (777) in the dash to the line.

The sprint was the culmination of a three-way battle that played out over the final two laps of the race, with Alvarado recovering from a shoe change to surge back to the lead and sprint from the front to grab her 14th victory of the 2019-20 season.

Alvarado and Worst battled one another for the whole race, resuming their season-long rivalry across the UCI World Cup, DVV Trofee and finally the Worlds in Dübendorf.

The pair surged into the lead early on, with U23 world champion Shirin Van Anrooij joining them out front. A first lap push from Alvarado saw the 18-year-old fall away, while Betsema had scythed through the field to fourth after starting from the back.

At the end of lap 2, Betsema and Van Anrooij lay 12 seconds down on the lead duo, while Eva Lechner (Creafin-Fristads) was best of the rest, 41 seconds back. An unscheduled shoe change on lap 3 saw Alvarado lose time, dropping back to the lone Betsema, and the chase for Worst was on.

The pair made it back to the Austrian on the penultimate lap, with Betsema following Alvarado across. From then on, the trio could barely be separated, though Betsema did have some trouble with an off-camber section.

Racing three abreast at times, the leaders didn't give anything up to each other, and it wasn't until the final bend that the decisive move was made.

There, with the trio having dismounted to climb the rise to the tarmac final straight. Alvarado led the way and remounted seamlessly, sprinting to the win as Betsema overhauled Worst a second behind.