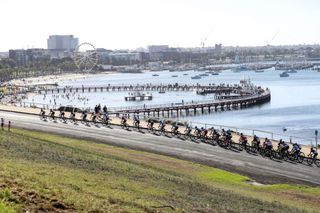 What was the opening round of the Lexus Blackburn Bay Crits in 2019 has now shifted to become the second race of the three-race series in 2020.

Overall winner of the 2014 Bay Crits series, Brenton Jones, describes the course to Cyclingnews as being more like a Belgian-style kermesse thanks to that longer circuit.

"That opens it up a bit more for some breakaways," said Jones, "so you've got the possibility of sending guys up the road, which makes for challenging racing, and then there's a crosswind from the water that happens every year to deal with, too."

Last year, Katusha's Marco Haller of Austria got the better of Jones' then Lexus of Blackburn teammate Raphael Freienstein and Miles Scotson, riding for the MS All Stars squad.