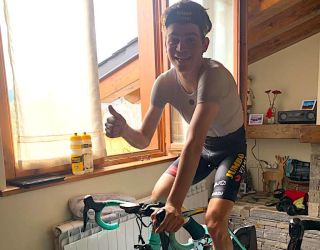 Sepp Kuss claimed victory in the Jumbo-Visma eRace on Sunday, beating his teammates in the 37-kilometre virtual, home-trainer race.

The American dispatched Jonas Vingegaard in the final kilometres before soloing across the line. Tobias Foss took the final spot on the virtual podium, some 44 seconds down on Kuss.

The race featured 20 of the team's WorldTour squad and nine from the development squad. Wout Van Aert and Steven Kruijswijk were present, but Tom Dumoulin and Primoz Roglic were elsewhere.

The race was held on the Zwift platform, using the Innsbruck circuit from the 2018 World Championships. The Olympia circuit, which was featured in all road races from the 2018 Worlds, but not as the finale for the elite men, measures 23.6km, with a 7.4km climb that averages nearly 6 per cent.

The Zwift leaderboard: Which pros have ridden the most?

The Jumbo-Visma eRace was based on one-and-a-half laps of the circuit so that, after descending back into town to start the second lap, the riders headed uphill again for a summit finish.

Attacks came and went in a fast and frantic start to the race, before Wout Van Aert accelerated to create a selection after the descent. Timo Roosen attacked and went clear onto the final climb, but was soon caught as the group fragmented and Kuss and Vingegaard went clear.

Kuss distanced the Dane once before quickly doing so again once he clawed his way back in the final kilometre. That acceleration was definitive, and Kuss crossed the line 14 seconds clear.

Kuss covered the 37.5km race in a time of 57:05, with an average speed of almost 40kph. His winning attack apparently saw him hit 583 watts and his heart rate reach 198 beats per minute.