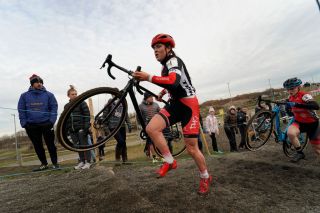 The 19-year-old, from Malvern, who has just signed for Trek Factory Racing Enduro next season, had to dig deep to fend of the challenge of Bethany Crumpton (Tarteletto- Isorex) before pulling away on the final lap.

“I can’t believe it,” said Harden.

“I’m absolutely gobsmacked, this is something I’ve always dreamed of doing but not now, not so young.”

A fast road start saw the field of 52 women’s field compressed as they hit a muddy off-camber within 300 metres of the start.

That allowed Crumpton to take the race on from the front and she was chased and passed by mountain bike specialist Harnden with favourite Anna Kay (Experza Pro CX) some 35 seconds back after the opening lap.

Harnden kept plugging away through the mud but her gap to Crumpton was kept at a handful of seconds as they reached the half-way point.

Behind Kay was a lone chaser in third with Abby-Mae Parkinson (Trinity Racing) and Amira Mellor (Albion Cycling Co) trying to chase behind.

However, with two laps to go Crumpton caught her young rival and passed her to take a slender lead of coming into the final lap.

Harnden once again used her skills to claw back up to her rival as the two ran side by side through the mud.

The youngster then had the strength to charge clear to take her maiden national title.

“I went off a little bit fast as I was a bit excited and very nervous for this race. I mean it’s cool to race with the elites but it’s tough competition.

“I got a little bit tired and Beth caught me up and I just found a little bit of energy at the end. She (Beth) Crumpton was a little bit strong at the running than I was and whenever we did running but whenever we were in the woods I was slightly faster and I think my mountain biking got me through the woods.

“I knew if I went into the woods first on the final lap I could open up enough of a gap to get me to the finish and luckily it worked.

“Before I knew it the race was done, it went so fast it was crazy.”

Harnden finished fourth in the Cyclo-Cross World Championships in Valkenburg In 2018 and hopes for another muddy event in Zurich in three weeks’ time when she challenges for the under-23 world title.

“If the World Championships is that muddy then I’m going to be very excited. It will take me back to Valkenburg so fingers crossed there is lots of mud and rain in the coming weeks for worlds,” added Harnden.

“I’m looking forward to it. I’m better at the muddier and soggier races than the dry fast ones so it definitely played to my strengths."