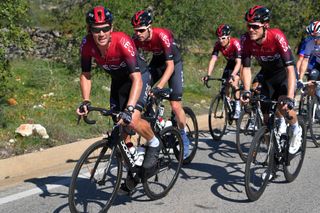 Cameron Wurf is still readjusting to life back in the professional cycling peloton at the Volta ao Algarve.

The new Team Ineos signing is racing again for the first time since 2014 at the age of 36, having joined the British squad at the end of January.

The Australian has successfully competed in Ironman triathlon events and trained with numerous Team Ineos riders but admits a lot has changed since he left the sport.

"I tell you what, it was a shock how much I've missed," he told Cyclingnews at the start of stage 4 in Albufeira.

"Five years is a long time to not race. You think that you can train with the guys and do those efforts, which is very controlled, you spend five years basically doing controlled work – even when I raced in an Ironman I'm in control of what effort I'm putting out.

"Here, when you have to chase people all the time it has really stung. But every day gets better and better and I feel better the last couple of days.

Luke Rowe: Team Ineos seem robotic from the outside but it's important to be professional

"It's definitely been a tough adjustment. You expect that – because you've done it before – you'll be able to waltz back in and it'll feel as comfortable as it used to, but it's the top of the sport, so it's how it should be. You shouldn't be able to focus on another sport for half a decade and be able to easily come back."

Since Wurf last turned a pedal in anger for Cannondale back in 2014, there have been changes throughout pro racing, from the bike tech to racing styles, plus the strength and performance of the riders. The increased level of competition, in particular, is something that he's been impressed by during his five race days back.

"The most exciting part for me is that the sport has moved on so much. I look around now and the equipment that everyone is wearing… If you had a 54 chainring on a few years ago you'd look around and think 'wow, it's like I've got an extra gear' whereas now it feels like you've got a 52 on.

"They're going so fast that you're spinning, you're thinking 'gosh, they've put the wrong chainring on my bike ­– I need more'," he joked.

"And it's really exciting to see how many good teams there are now, how everyone has stepped up. You look at all the other teams and there's good riders on all of them. The level of the sport is really good and that's been cool to see, to be honest."

Wurf says that he never regretted stepping away from the sport when he did, at the age of 31. He turned pro with Fuji-Servetto in 2009 and went on to race almost exclusively for Italian squads, taking in Androni Giocattoli and Liquigas/Cannondale before calling it a day.

Training with his friends at Team Ineos made him realise he still had the ability to race at the top level, though he realised that he'd only want to come back if it could be with the British team.

"I didn't need to come back, but to come back with the best team in the world – what an opportunity," he said.

"As Dave told us at the team camp, we only get to do sport for a very finite time, and you've got to make the most of every opportunity you get.

"It's been pretty seamless, and nice to be on the bus, speak English and have a bit of banter. It keeps the spirit light and I find I'm more focussed on the race when I can be myself away from it.

"In the past, I guess I never settled in with the Italian teams as well as I could have, and then in the peloton you're looking for a bit of interaction and maybe not focussing on what you should be doing. I've definitely noticed a big difference in my approach."

Wurf's return to the peloton has drawn enthusiasm from his new colleagues, with riders giving him training advice and support as he makes his way back up to speed.

"I spoke to Remco on stage 3 and he said he ran a 1:16 half-marathon when he was 16, which is pretty fast. He said he can't swim but he's interested in learning, so I told him 'well I'm definitely not going to help you with that process!'" joked Wurf.

His first stage race back as a pro ends on Sunday with a time trial in Lagoa, five days of racing and working for his new teammates almost at an end.

His schedule for the rest of the year – aside from returning to triathlon for the Ironman World Championship in Kona, Hawaii in October – isn't set, but Wurf says that he's ready to race when and where.

"It's not really planned. I wasn't meant to be in Geelong for Cadel, obviously, and wasn't meant to be here," he says. "I was in Los Angeles when I got called to these races, so I'll go home to Andorra and settle for the next six to seven months, and then at least I'll be on the same continent for whatever race I get called to.

"It looks like I'll have something on every month. My role is to try and take some slack off guys from having to race an extra race or save the team from sending guys where they're a rider short.

"I don't know how much use I've been here, but I've been at least more use than not having someone. If I can keep doing that then I think I'm making about as much of a contribution as can be expected of me."