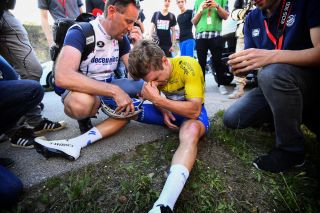 Remco Evenepoel (Deceuninck-QuickStep) defended his leader's jersey at the Volta ao Algarve on Saturday, finishing among the leaders on the race's second uphill finish atop the Alto do Malhão.

The 20-year-old, who took the yellow jersey with a stunning victory on the longer Alto da Fóia two days ago, ended up third on the remote hill in southern Portugal, giving up four seconds to stage winner Miguel Ángel López (Astana) and two to Dan Martin (Israel Start-Up Nation).

Shortly after crossing the line, Evenepoel collapsed off his bike onto the side of the road, lying spread-eagled on the ground for moments afterwards such was his effort to retain the race lead. After recovering and composing himself, the Belgian revealed exactly what it took him to do so.

"It was very tough, and I had to fight," he told the assembled media before the podium ceremony. "In the final kilometre I looked at my power meter, and at a certain point, I was pushing 1100 watts.

"I think the image after the finish was enough. I was totally empty in the end, but you have to be to defend the jersey.

"The team was outstanding today – I think you saw three Classics guys still on the front in the last lap. It was simply amazing, and I can be proud of them."

Fourth-place finisher Max Schachmann (Bora-Hansgrohe) was Evenepoel's closest competitor before the stage, level on time with the race leader. The time gap remains the same, but now Martin lies second, also on the same time. López is third, one second down, while Rui Costa (UAE Team Emirates) is three seconds back after his fifth place.

But although the standings are close, with another four men within 30 seconds of the race lead, Evenepoel's position is far more secure in reality. Sunday's 20km time trial in Lagoa means that he, a TT silver medallist at last year's Worlds and European TT champion, should hold on.

Evenepoel wouldn't call the final stage a victory lap just yet though, with Schachmann more than capable of putting in a top performance against the clock himself.

"The most important thing is that I am still leader, and tomorrow I can start the time trial in the yellow jersey," he said.

"[Today] gives me a lot of motivation. Tomorrow I just have to trust my power and my shape. It will be 20-kilometres at full gas, and then hopefully I can take this yellow jersey home."

Evenepoel, who won the Vuelta a San Juan earlier this month, admitted he was impressed by his own ability on Malhão, though he said that his positioning in the final kilometre meant he couldn't immediately follow what turned out to be the winning move.

"I tried to follow López. He went for the win, and what happens? You have to follow. When he attacked, I wasn't well-placed, and couldn't react immediately.

"I just wanted to finish with the first group. I managed to do that, so I managed to impress myself, I guess."

After impressing much of the cycling world, including himself, during the opening four stages of the Volta ao Algarve, tomorrow's final test awaits in Lagoa.