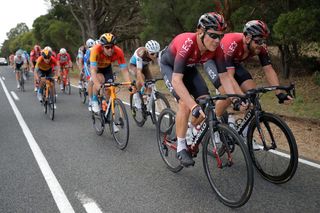 There was to be no gentle reintroduction to the pro peloton for Cameron Wurf, who found himself on the front of the peloton riding hard through crosswinds mere kilometres into Sunday's Cadel Evans Great Ocean Road Race.

Wurf, a former rower, was a professional cyclist for six years and rode for the Liquigas-Cannondale team, but hung up his wheels at the end of a 2014 season in order to take up triathlon.

Coached by Team Ineos' Tim Kerrison, Wurf was familiar to the team, having been invited on numerous training camps, and when Vasil Kiryienka recently announced his retirement, the 36-year-old was handed a ticket back to pro racing.

Geraint Thomas to target triathlon and Ironman events when he retires

His first outing came on Sunday, just two days after the announcement he'd signed for Ineos. The Cadel Evans Great Ocean Road Race saw blustery conditions, and Wurf helped Ineos split the peloton in the early phase of the race.

"It was super hard, as expected. As a team we didn’t have a sprinter, so the plan was to make it as hard as possible, and that meant making it hard from the start," Wurf said.

"For my first race back, it would have been lovely to have maybe 50-60km to ease your way in, but I was the first person to do a pull. That was about 5km into the race and I was on the limit it from then on."

The race came back together after the early flurry but Ineos were prominent again when the race intensified ahead of the finishing circuit. Pavel Sivakov went on to take second place, pipped in a sprint by Deceuninck-QuickStep's Dries Devenyns, while Dylan van Baarle placed fifth from a four-man group four seconds behind.

Wurf did not finish the race, climbing off on the finishing circuits.

"When you’ve got a team like this, it’s easy to motivate yourself to do whatever you can," said Wurf. "You can tell that Pavel and Dylan particularly were super strong. If we could make it hard all day then they had a chance of doing well – and they showed it at the end. It was great."

As for returning to his old surroundings, Wurf said he slotted straight back in.

"I felt pretty comfortable out there in the peloton. I didn’t know if everyone knew it was me and were giving me a bit more space. A lot of guys said hello and welcome back which was really nice," he said.

"It was a great way to start. It was tough but I’m glad I did it now, as early as possible. Now I know what to expect and to improve for next time."