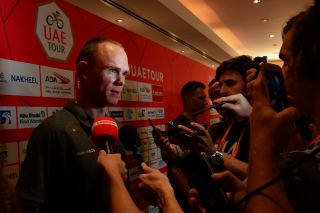 After eight months off the bike, Chris Froome (Team Ineos) returns to racing at the UAE Tour on Sunday.

Since his horrific leg-break at last year's Criterium du Dauphine the four-time Tour de France winner has been in full recovery mode, and while he admits that his left leg is still over-compensating for the weaknesses on his right side, the 34-year-old is looking forward to being back.

During the UAE Tour pre-race press conference in the plush surroundings of the Meridian Hotel, the Team Ineos leader looked nervous at times. It's not surprising given that this was his first real test in front of the cameras since last June but the real examination starts on Sunday when the race rolls out for what should be a sprint stage.

In many ways, the UAE Tour is the perfect comeback race for Froome. It's a WorldTour race but doesn't have the level of prestige of many of its equivalent events; the field is strong but not spectacular; the roads are relatively flat and wide; and although there maybe be cross-winds, there with little chance of rain.

However, Froome isn't just any rider and his horrific crash at the Dauphine last June was no run of the mill accident. Over the coming days, we are unlikely to have all the answers as to whether he can truly return to the pinnacle of the sport but we should at least get the first indications as to whether the hope of a fifth Tour de France win is anything more than a dream.

"After the crash last June I've been away from racing for eight months and this feels like the first day back at school again," Froome told reporters, including Cyclingnews.

"I'm really excited to be here and I hope that I'm at the right level to get through the race. I'm obviously not going to be winning but I'm really looking forward to racing again."

He was then asked if he ever doubted he would return to racing. The question drew a wry smile, as if to suggest that Froome is very much still in the throws of recovery and this race is merely a stepping stone towards full health.

When the riders broke from the press conference to form an orderly line for the television cameras, Mark Cavendish gave his compatriot a warm and encouraging welcome back before the two were separated by the demands of different media crews. While Cavendish was asked about the sprint finishes that lay ahead, Froome's inquisition naturally focused on his recovery.

"There have been some really tough moments in the past eight months but the goal was always to try and start off early," he explained.

"Being here is evidence that it has gone as well as I could have hoped. I'm super happy to be given this second chance of being back in the peloton. I just want to get through the week as best as I can. I'm definitely not going to be winning this week but I've got to start somewhere. This seemed like a great event to start with."

"I'm quietly nervous and excited to be back in the peloton. I think that's natural after being out of the peloton for so long."

Assuming Froome can push through the flat stages it will be fascinating to see how he fairs on the summit of Jebel Hafeet, where stages 3 and 5 will both be decided.

A strong performance will go a long way silencing some critics but the reality is that Froome will probably not look at the results sheet as the week progresses. What he needs in his legs are racing miles, steady racing miles, and if he can survive a week in the saddle it will be seen as a victory for both him and his squad.

However, the lack of power balance in his legs is still a major factor.

"When I'm pedaling it's definitely not 50 per cent on each side. The left side is working harder than the right. The rehab has taken a back seat for now. Now the focus is on being back on the bike and spending the hours in the saddle. I'm still doing a few sessions every week of rehab and trying to work on the imbalances that I have. I'm just doing the most that I can, every day, and every week."

Cyclingnews will have full coverage of Froome's return to racing and all the action from the UAE Tour.