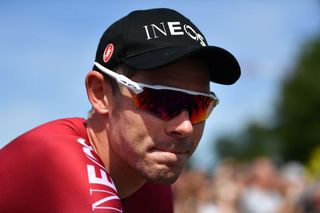 Team Ineos have rewarded Luke Rowe for his dedication and hard work as a vital domestique and Classics rider, extending his contract until the end of 2023.

The Welshman has spent his entire professional career with Team Sky/Team Ineos, often sacrificing his own chances for the good of the team and to help others win.

He has become an experienced road captain and played a vital role in five Tour de France victories, despite not being a climber, with his bike skills and tactical nous, helping to protect Chris Froome, close friend and fellow Welshman Geraint Thomas, and most recently Egan Bernal.

"It's a clear sign I'm happy here and a sign of respect and trust both ways," Rowe told Cyclingnews during an exclusive interview, revealing the news of his new deal.

Rowe: Another serious crash and I might never walk again

"There were other places I could have gone, and I had two years left on my previous contract, but we talked, ripped it up and extended. It was an easy decision for me; I think we get well looked after, and have great staff and great riders at Team Ineos. It's a sign of confidence from them because four years is a long time in pro cycling – as long as it gets. They clearly believe they can get their money's worth from me, even in three years' time. I'll try to repay them by being the best I can be whenever I put my leg over the bike.

"I've been here eight years now; another four would take me up to 12, and up to being 34 years old. That could mean I'll spend my whole career on one team; I'd be proud of that. I'm a loyal guy and my teammates know that."

Nobody would be surprised if Rowe stayed on after his racing career, perhaps becoming a directeur sportif or performance manager, like Rod Ellingworth, who instilled his principles in Rowe during his under-23 career.

Rowe has been through the good and bad times at Team Sky and Team Ineos. He witnessed the transfer of power between Bradley Wiggins and Chris Froome, and lived through the doping accusations and the tensions of the Tour de France as a minority of French fans targeted Team Sky from the roadside. He appears to epitomise Team Ineos' air of arrogance, but is respected and listened to by his peers in the peloton.

He occasionally loses his cool with the fans and media, and was kicked out of the 2019 Tour de France after an altercation with Tony Martin after the German tried to ride him off the road in a fight for position. Yet he has matured over the years and will be 30 in March. He is now a father and husband, and knows that the complex tibia and fibula leg fracture he suffered during a water-rafting accident could have ended his career.

Rowe rarely gives interviews but is enthusiastic and happy about his new contract and about starting the 2020 season at the Tour Down Under in Australia.

"Age creeps up on you. I’m going on 30 but it seems like just yesterday that I was turning pro. Life goes quickly," he tells Cyclingnews.

"I feel I'm in that middle zone of my career; a lot of the learning has been done. You keep striving to improve but now it's about getting the best out of myself, be that trying to win races myself or trying to support others winning. Or perhaps a mix of both."

Rowe's wide talents make it difficult to pin a job title on him. He's a road captain, a cobbled Classics leader, but also a domestique and a loyal team player.

"The British saying is 'jack of all trades and master of none'," he jokes with a show of modesty.

"I think I can be a benefit to the team in any race and in any month of the season. There are moments when I get a chance to win but I will also commit to others to deliver on that day. Even at the Tour de France, I like to think that for the 21 days of the Tour I can provide something each day to the team, even if it's a mountain day."

Rowe finished eighth at the 2015 Paris-Roubaix and fifth at the 2016 Tour of Flanders but has gradually transitioned more and more into a domestique role as Team Ineos' roster has strengthened. Yet the cobbled Classics remain unfinished business for both Rowe and the team.

"The cobbled Classics is the one big area where we're yet to win," he admits.

"We're trying to improve and win but it's a tough one. We've spoken about it at the recent team camp. We've been looking at ourselves in the mirror and trying to get better. We've had good teams every year but it's just not happened for one reason or another. But we'll keep chipping away.

"I'll continue to race the cobbled Classics and continue to try to achieve something myself. It's the one month of the year when I get to race for myself. Whether that big win is possible, I don't know, but I'm not going to go in looking for a top 10 – I'll be looking to win. I think both as a team and personally, we've got unfinished business on the cobbles."

Rowe's palmares includes just two victories but he has been part of five Tour de France victories. He is pragmatic about his career and proud of the often unseen but vital roles in arguably the most successful Grand Tour team of recent times.

"I wouldn't be in one of the best teams in the world if I was selfish and said I wanted to win races. I'm not running myself down by saying that – I think I can win races – but this is a better role to play and what I enjoy more. I also think it will prolong my career," Rowe points out.

"I'm satisfied when a teammate thanks me on the bus after doing my bit; not being seen on television is fine for me. I’m happy doing my job and if nobody but my team and teammates notice, that's all that matters."

Rowe is very proud of his and Team Ineos' Tour de France success.

"I'm lucky to have been part of them all. The first with Froome was unique, the second and third were amazing, too, as was the last with Egan. Of course, Geraint's win was the most emotional for me. We're close, we grew up racing as kids together in Wales, and have been through a lot together."

Rowe is again hoping to be part of the 2020 Team Ineos line-up for the Tour de France. The team have named Bernal and Thomas as team leaders, while Froome is trying to recover from his terrible crash and subsequent complications. Rowe thinks all three will be a threat come July.

"When a 22-year-old does what Bernal did in 2019, it's a clear statement. But to say he'll go on and do it for years, that's difficult to say for anyone because the Tour is such a hard race," Rowe warns of the simple suggestion that Bernal has begun a new generation of winners at the Tour de France.

"But Egan is so, so talented. He's got all the attributes and is going to get better with age, so there's no reason he can't win the Tour a lot of times. But it'll be great to see 'Froomey' back and win another, and for Geraint to win another. I'd be happy if any of them win it in 2020. I think Froomey will surprise a lot of people, I think 'G' will be better than ever, and Bernal will step up, too. At the same time, our rivals will step up as well. It's going to be a great Tour yet again."

Not Blade Runner replicants, nor the bad boy of the peloton

Rowe admits he enjoyed the thrilling racing of the 2019 Tour de France when Deceuninck-QuickStep's Julian Alaphilippe took the race to Team Ineos, and led the race for 14 days, only to crack the Alps and for Bernal to go on to take final victory. But he also defends Team Ineos' often robotic style of racing and their dominance of the peloton thanks to their focus on the Tour de France and ability to buy the best riders in the peloton.

"The 2019 Tour was a great race, and what people wanted to see: a race to the death. I think we should all be excited about it. But, of course, I'd rather win it by 10 minutes," he admits, refuting notions that Team Ineos are robotic or some kind of Blade Runner replicants.

"I think when we turn up to a race, and especially the Tour de France, we're just focused," he says.

"We have a laugh on the bus and in the hotel but, when it's game time, you need be to concentrate 100 per cent. Team Ineos seem robotic from the outside but it's important to be professional and focused. To get the most out of yourself, you've got to do the job right for five hours a day in the saddle and do that day after day."

After several spats with the French fans and the media, Rowe seems to be more diplomatic when talking about his critics. His character is genuine and still strong, but he has matured and is no longer the bad boy of the peloton.

"I think 99 per cent of French fans are lovely people, and I think if a French rider raced in Britain, they'd say the same of British fans," he says carefully.

"In any sport and any nation, there's always a small minority that don't like you. That's fine. I don’t want to be loved and hugged by everyone. It is what it is, and it's understandable because we've gone to France and won their race for the last seven out of eight years. As a professional athlete, you've got to take criticism and have wide shoulders.

"I regret the moment with Tony last year, but I can't change that. I don't look back, I look forward. Things happen, good and bad. It's so easy to sit on the outside and say that it was a mistake, but it was a racing incident that happens a thousand times in the peloton.