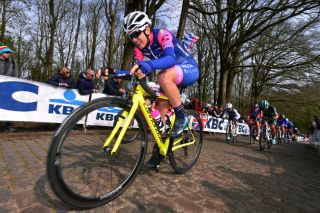 WNT-Rotor have announced the signing of two-time European track points race champion Maria Giulia Confalonieri for next season. The 26-year-old Italian rider joins having spent the last two seasons on the road with the Italian Valcar Cylance team.

While still searching for her first win on the road, Confalonieri finished third at the 2018 Omloop Het Nieuwsblad, and will next year combine riding the Classics and performing lead-out duties for the team's sprinters on the road with preparing to compete on the track for her nation at the Olympic Games in Tokyo.

"From the outside, it looks like such a close group and a great team," said Confalonieri in a press release. "I've noticed throughout this season how well the team works together in races, and I want to help to be a part of that next season and be a key part to the success.

"I'm very excited," she added. "I want to ride well, especially in the Classics, and I believe I can step up from where I am at this moment in my career, with a big goal looking towards the Olympics."

Confalonieri is the reigning European points race champion, having defended her 2018 title at the UEC European Track Championships in Apeldoorn, in the Netherlands, last month, ahead of taking second place in the event at the opening round of the 2019/20 Track World Cup in Minsk, Belarus, earlier this month.

WNT-Rotor also recently announced the signing of European Madison champion Julie Leth, who will also combine her Olympic track ambitions with a road programme in 2020.