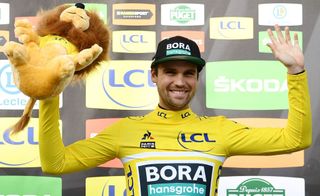 Max Schachmann held onto his lead in Paris-Nice despite having a minor crash in the final kilometre of the 161.5km stage from Sourges to Apt but his overall victory hinges on two possibilities: that the race goes forward and his advantage is threatened on the 16.3km long, category 1 Valdeblore la Colmiane on Saturday's final stage, or the race is called off before the stage can begin and Schachmann is declared the de facto winner due to the coronavirus pandemic.

Racing got underway for stage 6 without Bahrain McLaren, who chose to distance themselves out of precaution to stop the virus' spread. In the race, Schachmann marked almost all of the moves from his rivals on stage 6, with second-placed overnight Søren Kragh Andersen (Sunweb) launching a dangerous move on the Cote de Caseneuve with 38km to go to bridge up to remnants of the day's breakaway, including notable climber Romain Bardet (AG2R La Mondiale) and Nicolas Edet (Cofidis) with 32km to go, putting enough distance to the peloton to move into the 'maillot jaune virtuel'.

Bahrain-McLaren pull out of Paris-Nice over coronavirus concerns

But well before the Cote d' Auribeau (4.5km at 5.8%) that lead crumbled and had fallen to just 19 seconds on the climb as Kragh Andersen jettisoned his companions. Behind, Vincenzo Nibali (Trek-Segafredo) launched a move and was joined by Benoot and after the Italian was dropped, Benoot kept on driving the pace over the undulating final 12km to solo in for the victory.

Schachmann's teammate Felix Großschartner helped limit the losses and kept his leader in the first chase group until the yellow jersey wearer took a spill in a sharp right turn.

"I crashed with about 800 metres to go but I'm well," Schachmann said. "The race was full on and the guys were going full gas down. I had a small gap and came back but I think I was a bit too fast. I made a mistake but managed to get back on my bike. I still have the yellow jersey and tomorrow will certainly be a tough stage but I felt good in the last long climb. Today we rode a bit defensively but there is no doubt tomorrow will be all out."

Whether the now-final stage 7 will take place has come under some doubt after the French Federation on Friday announced that all cycling events would be cancelled with immediate effect, inexplicably excepting Paris-Nice. The race has so far been allowed to continue as the number of new coronavirus cases in France has doubled twice since stage 1.

The fact that there is even a leader of Paris-Nice at the moment is exceptional since almost every other major sporting event worldwide has been cancelled to help stop the coronavirus pandemic. Amaury Sport Organisation took steps to isolate the race from the public, holding the last five stages 'behind closed doors', but Bora-Hansgrohe announced Friday morning that one of its staff had begun developing symptoms. The person did not meet the criteria for coronavirus testing but was isolated out of precaution.

Scientists report that the novel coronavirus SARS-CoV-2 that causes Covid-19 can be transmitted person to person before symptoms are apparent.

The ASO's actions to continue racing through Saturday's mountain top finale to La Colmiane stands in stark contrast to the UAE Tour organisers, who called off the final two stages after two people showed possible Covid-19 symptoms. While most of the race entourage left quarantine after testing negative a few days later, Groupama-FDJ, Cofidis, Gazprom-RusVelo and UAE Team Emirates were kept behind. The two French teams were released after repeated negative tests while two Gazprom riders, Dimitry Strakov and one other rider, and Fernando Gaviria and lead-out man Max Richeze both confirmed they had tested positive for the virus but are in good health.

There is still a chance that ASO will be forced to stop the race before Saturday's planned stage 7. Is Schachmann be the winner of Paris-Nice? The answer could be up to forces outside cycling.