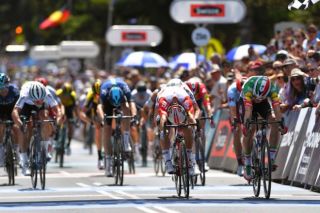 The organisers of the 2020 Cadel Evans Great Ocean Road Race have announced the return of Arlenis Sierra and Elia Viviani for January's one-day races as both riders attempt to become the first to successfully defend their titles at the Australian WorldTour event.

After soloing to her victory in 2019, Sierra is set to again lead her Astana teammates in the women's event on February 1, which starts and finishes in Geelong, 75 kilometres west of Melbourne, while Viviani will head his new Cofidis team, which he's joined for 2020 following two seasons with Deceuninck-QuickStep.

"I'm really excited to return to Geelong – I love the place," Viviani said in a press release on Friday. "It's a good course where I can ride my bike and relax next to the sea after training, and it's a super atmosphere all week.

"It's a race that suits me perfectly," continued the reigning European road race champion, who won last year's race in the colours of the Italian champion. "It's hard but not super hard, and a reduced bunch sprint is what I prefer. In 2019, my team was super strong – they controlled the race from the start, they closed down every move and at the end they did a super lead-out for me, and it was a big win for me."

Viviani got the better of home favourite Caleb Ewan (Lotto Soudal) to win in 2019, and expects a stiff challenge from the Australian sprinter again in Geelong early next year, having recently raced against him at the Six Day London track event, which Viviani won, together with partner Simone Consonni.

"Caleb was the best sprinter at the Tour de France this year – he was super strong there," admitted Viviani. "From January, we met a number of times, and every time our sprint was a battle all the way to the finish line. He's young, but he's already one of the best sprinters in the world. The battle will continue next January, but it was also fun to meet him on the track in London at the Six Day."

Viviani said that he was looking forward to working with his teammates at Cofidis, and has every confidence that he'll be in the mix in the sprints at the biggest events next year with his new squad.

"They've stepped up to WorldTour level [for 2020], and together we'll work to build a super strong team. Cofidis have a long history in cycling, and the prestige of the team gave me the confidence I needed to sign with them for the next two years," he said.

"The first goal next year will be to find my groove with my new team and start the season in the best way possible. That means coming back to Europe from a month in Australia with at least one or two wins," said Viviani, implying that he may also again compete at the Tour Down Under in Adelaide, where he won the opening stage in 2019, and which finishes the week before the Cadel Evans Great Ocean Road Race.