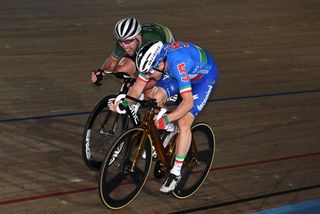 It was Italy's Elia Viviani who eventually got the better of home favourite Mark Cavendish to take the overall title at the 2019 Six Day London (Image credit: Getty Images)

Elia Viviani and partner Simone Consonni took the overall title at the Six Day London on Sunday evening, having begun the final night's racing in third place. The Italian pair leapfrogged the German team of Theo Reinhardt and Maximilian Beyer and deposed home duo Mark Cavendish and Owain Doull in the final event of the night.

The sixth and final day of racing saw most of the favourites finish well off the pace in the opening Team Elimination Race, won by Marc Hester and Oliver Wulff Frederiksen of Denmark, but Viviani and Consonni began their fightback by taking second place in the 250m Madison Time Trial behind French pair Bryan Coquard and Donavan Grondin.

Cavendish and Doull then showed why they had come into the final day as the overall leaders by winning the 60-lap Derny race, with Cavendish coming out on top ahead of Australia's Caleb Ewan and Viviani as all three riders – and their Derny riders – spread out across the final straight.

However, there was still everything to play for in the hour-long Final Chase Madison event, which Viviani and Consonni went into in third place overall, a lap down on both Cavendish/Doull and Reinhardt/Beyer, but with a superior points score.

After the Italians were able to take a lap back, it all came down to the points available on the last couple of sprint laps, with Consonni taking the decisive penultimate sprint from Cavendish by a nose. It left Consonni and Viviani with just an eight-point lead with 10 points available to whoever could win the final sprint, and, despite a valiant effort from a tired Doull, it was Viviani who powered past the Welshman with two laps to go and easily took the final 10 points, and the Six Day London title by 12 points.

"We knew in the last 15, 20 minutes we could make the difference, and we waited to gain the lap we lost yesterday," Viviani explained after taking victory. "We are both fast, Simone and I, and we played with Cav and Owain. We know Cav is super fast and Owain a little less.

"When Owain was there, we tried to anticipate it and get a gap, and then I could enjoy the last moments of this amazing and intense week," he said.

"I only raced with Simone for the first time last week, and we have a great relationship," Viviani said in praise of Consonni. "We're doing the Madison together at the Olympics next year, and this is the start of our sporting relationship."

A disappointed Doull, meanwhile, was philosophical in defeat.

"One of the downsides of leading going into the final event is that you know you're the main guys and that everyone wants to jump you," he said. "The lead kept changing hands, but unfortunately we didn't have it at the end."

In the women's competition, held over the final three days, Scottish pair Katie Archibald and Neah Evans took the title from Laura Kenny and Elinor Barker, while the sprinters' competition was taken out by Max Levy, ahead of Yuta Obara and Robert Förstemann.