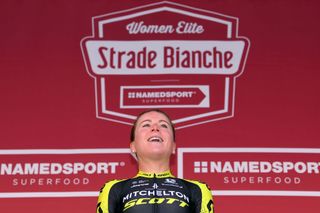 Annemiek van Vleuten (Mitchelton-Scott), Anna van der Breggen (Boels Dolmaans) and Marianne Vos (CCC-Liv) are confirmed to restart the Women's WorldTour season at Strade Bianche in Italy on Saturday. The three powerful Dutch riders are expected to go head-to-head in a battle for victory on the white gravel roads of Tuscany.

Defending champion Van Vleuten, also the current road race world champion, is currently on a winning streak in her rainbow jersey having won Omloop Het Nieuwsblad in February before the season was shut down due to the COVID-19 coronavirus pandemic, and she then won all three one-day races held in Spain last week.

Strade Bianche marks the restart of the Women's WorldTour and Van Vleuten told the press that she use the five-month hiatus prepare specifically to be ready for the Italian one-day race.

“For sure I feel pressure because it’s the first World Tour race and it’s something I’ve targeted, so when I target a race I always feel a bit of pressure, because you know you’re good and people know that you want to perform," Van Vleuten said.

“Even more at Strade Bianche, because it can be a really hectic race and you need to be well positioned all the time, which makes me a little bit nervous. But it’s also very beautiful and a nice challenge that I look forward to. I know that I can go into the race with confidence because I know my shape is good.

“We already had such a high level with the races in Spain so I don’t expect a really big difference this weekend, all the teams were there and all the riders were there, so it will almost be the same. I think the only difference is that we normally race in the spring and now we will race in August, so I’m curious how the white roads are in the summer-time.

“Of course, it’s nice to win in the rainbow jersey, but I’m not thinking about it. I’m just focusing on wanting to perform in the best way with the team. I think we can all take a lot of confidence out of the races in Spain.”

Last year, Van der Breggen and former teammate Annika Langvad formed a powerful duo with the latter placing second to Van Vleuten. This year's team is a mix of young and experienced riders sure to have an impact on the race.

CCC-Liv will line up with Vos and Ashleigh Moolman-Pasio, who both finished in the top-10 last year. The team will also feature Jeanne Korevaar, Sabrina Stultiens, Soraya Paladin, and new signing Sofia Bertizzolo.

“Our riders are in good shape, which does not say everything. After all, the Strade Bianche is a very specific race in which something can always happen. Especially under the warm, dusty conditions of next Saturday, it is important to stay focused. We have a strong team across the board and will try to take advantage of this," said CCC-Liv sports director Jeroen Blijlevens.

The women will race 136km that includes eight sectors of strade bianche, totalling 30km, which equates to roughly 23 per cent of the route, before ending at the Piazza del Campo back in Siena.

“Gravel section 5 is 9.5 kilometres long," Blijllevens said. "As everyone prefers to be well positioned there, it is traditionally hectic. If there is a breakaway, we will try to be part of it. But we also know that the pace can drop after this, anticipating the real final. If the race explodes, we want to sit at the front with several riders. At that point, we have to see to what extent we can withstand the strong competition.”