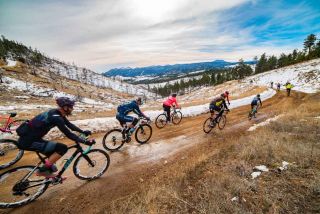 The town of Lyons will host the next stop for many of cycling's growing number of "gravel pros" this weekend when the 6th Annual Old Man Winter Rally sets off on a 100km course that will test riders against the course and the elements.

Boulder County, where the race will take place, got more than a foot of snow this week, but that will only add to the epic adventure for 1,200 registered participants, according to race organisers.

"Old Man Winter is all about gearing up for winter adventure, having fun with your buddies and enjoying a great party at the finish line," said Josh Kravetz, the event's founder and President of Adventure Fit, a Boulder-based Active Entertainment event company.

Howes, who won his stars-and-stripes jersey with a gutty ride last June in Knoxville, Tennessee, has not yet started his 2020 road season with his WorldTour team and will instead loosen his racing legs on the gravel roads near his Boulder home.

Winder, who won her US road title with a similarly hard-fought ride in Knoxville, already claimed her first road win of the year for Trek-Segafredo at the Tour Down Under in Australia, where she took the stage 3 win in Stirling on her way to overall victory.

Old Man Winter defending champion Yannick Eckmann will have to dig deep to not only get past the Dirty Kanza winners and the US pro champions, he'll also face Peter Stetina, the former WorldTour road pro who won the Belgian Waffle Ride last year, as well as former Team Sky and Katusha rider Ian Boswell.

The event also includes a 50km bike course along with a 10km run. Cyclists on the 100km course will traverse mixed terrain that includes rolling gravel roads, classic Boulder County climbs, fast tarmac and the infamous Rowena Trail, which connects Lefthand Canyon to Sunshine Canyon and is a two-mile stretch of historic gold mining railroad line, according to race organisers, who suggest preparing for snow in sections.

After descending a twisty gravel road, riders will come to the end of the first timed section. For safety reasons, riders will not be timed going down Sunshine Canyon or through the City of Boulder. Timing begins again as riders start up the first of two punchy climbs. After the second climb, the course is relatively flat for the final 32km on gravel roads back into Lyons.