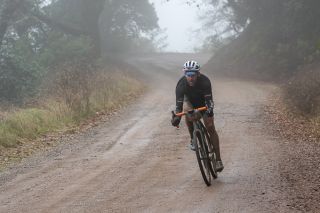 Geoff Kabush on his way back to the front of the race (Image credit: Brian Tucker)

Olympic mountain biker Geoff Kabush claimed the opening round of the Grasshopper gravel series - Low Gap - at the weekend after catching the leaders for almost five minutes on the final descent.

Former WorldTour rider Peter Stetina had attacked on the opening climb of the race and built up a healthy lead before Sandy Floren caught the former Trek-Segafredo rider in the closing stages.

However, both riders were chased down by Kabush, who soloed down the long descent towards the finish before scooping up the two leaders with just a matter of meters remaining. Kabush kicked for home on the final slight rise before the line to take the first race in the series.

"It started at around half an hour, which was all uphill and on pavement. I wasn’t looking forward to that too much and that was the first time I’ve had to go hard in a few weeks," Kabush told Cyclingnews on Sunday night.

"Peter attacked pretty hard on that section and then Sandy, who won last year, went with him. We had a group behind that just settled in with the top North Cal guys and Laurens ten Dam. We rode in a group over the climb and into the valley until we hit dirt. We had a time check that Pete was around five minutes clear when we headed onto the dirt. I don’t think it was quite that much but I was feeling pretty good.

"It was rolling for about an hour and I was feeling pretty good. Then the race ends with a long downhill, so I just started having some fun and rode as hard as I could. At the top of the last climb I got a time check that I was still around three minutes back but I just went as fast as I could."

Stetina lost time on the final descent and, with his lead evaporating, Floren and then Kabush made contact.

"It was a dramatic finish and I didn’t think that I’d see the two leaders again. Sandy had caught Peter with just over a mile to go and I could just catch glimpses of them but I didn’t think I’d get them," Kabush said.

"I was praying that they wouldn’t see me coming. There was a tiny rise and I just grabbed as many gears as I could and just slingshot by them. I definitely didn’t think that I had any business winning that race but I surprised myself. Experience and skills pay off sometimes."

Gravel racing, especially in North America, has seen a significant upsurge in the last year, with a number of WorldTour riders making the switch in disciplines. Ian Boswell – formerly of Katusha and Team Sky – announced his plans to race on gravel in 2020, while the Grasshopper series has seen a surge in interest.

For Kabush, who has experience in virtually every cycling discipline imaginable, the real interest and desire to ride on gravel comes from a sense of enjoyment and community.

"I find it amusing seeing all the gravel headlines. It’s quite the buzzword but there are going to be a lot of events to follow," he said. "For me, it’s just about riding and exploring. It’s just really enjoyable to get off the pavement because there’s just some really fun riding you can do now."

Kabush is likely to mix his gravel schedule with mountain biking over the coming months.

"I’ll do a few more throughout the year," he said. "I’ll pick and choose the ones that I want to do."