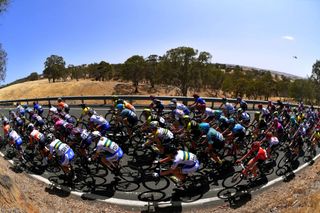 The UCI announced Tuesday the 25 races that will make up the 2021 Women's WorldTour. The top-tier of events will include two new Spanish stage races: Itzulia Women from May 14-16 and Vuelta a Burgos Feminas from May 20-23, along with the return of Prudential RideLondon Classique on May 30.

The series will once again begin at the Cadel Evans Great Ocean Road Race in Australia on January 30 before moving to Europe for Strade Bianche on March 6.

The traditional calendar will then move to the Netherlands for Ronde van Drenthe (March 14) and back to Italy for Trofeo Alfredo Binda (March 21).

ASO surprised the cycling world by adding the first-ever women's Paris-Roubaix to the revised late-season Women's WorldTour this year.

The peloton will then turn its attention to the stage races beginning with the three-day Tour of Chongming Island (May 6-8).

Notably absent from the calendar is the Amgen Women's Tour of California, which announced it would take a one-year hiatus to restructure business fundamentals, however, it appears that it will not make a return to the Women's WorldTour in 2021. Also not returning to the calendar is Emakumeen Bira after organisers cancelled the event last year.

"The organisers of the Amgen Tour of California Women’s Race empowered with SRAM have not requested registration of their event on the 2021 UCI Women’s WorldTour calendar," the UCI noted in its press release.

The May block of racing will now include two new additions to the calendar with the three-day Itzulia Women (formerly Donostia San Sebastian) and the three-day Vuelta a Burgos Feminas.

RideLondon Classique will make a return to the calendar on May 30 after being left off the 2020 Women's WorldTour due to overlapping of dates with the Ladies Tour of Norway.

The stage racing continues with the Women's Tour in Britain from June 7-12 followed by the 10-day Giro Rosa held from July 2-11 in Italy.

As in previous years, La Course by Le Tour de France will be held as a one-day race on July 18 in conjunction with the final stage of the men's Tour de France.

The Women's WorldTour will close out with the penultimate Madrid Challenge by La Vuelta (September 3-5) and the finale at the Tour of Guangxi (October 19).