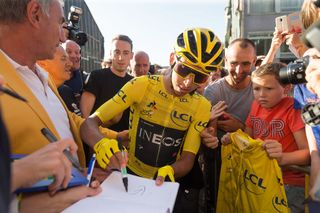 The UCI announced the dates of the 2021 road season, confirming the Tour de France will start one week earlier to avoid a clash with the Olympic Games elite men's road race.

The Tour de France was originally due to begin on July 2 in Copenhagen, Denmark, but the final weekend of the Tour overlapped with the men's road race.

The date conflict came as a result of the unprecedented postponement of the Tokyo Olympics due to the coronavirus pandemic.

Copenhagen is also hosting the European football championships in the last week of June and declined a request from the Tour organisers Amaury Sport Organisation to move their Grand Depart up a week.

The ASO have been in negotiations with the Danish organising committee to postpone the Grand Depart there until 2022 and with Brittany to hold the start of the 2021 Tour de France.

The Vuelta a España will also move up a week, starting August 14 and ending September 5, while the Clasica San Sebastian remains on August 31, one week after the Olympic Games men's road race.

The Vuelta "will be held a week earlier than its usual dates, to allow for a better transition between the Vuelta, the European Championships (announced for the weekend of 11-12 September) and the UCI Road World Championships," the UCI said in a statement.

Notably absent from the 2021 WorldTour calendar is the RideLondon-Surrey Classic, which was cancelled for 2020, the Presidential Tour of Turkey and Tour of California, which went on a 'hiatus' this year.

"The organisers of the Amgen Tour of California (United States) and the Prudential RideLondon-Surrey Classic (Great Britain) have not requested to register their event on the 2021 UCI WorldTour calendar," the UCI said.

"The UCI regrets the departure of these two events and will work with concerned parties towards trying to ensure the return to the leading series for men’s professional road cycling of events taking place in these two regions that are important for high-level cycling."