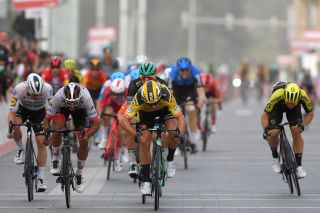 One of the most fascinating aspects of covering a race like the UAE Tour is just how much closer you can get to the riders. At most European races the athletes have the sanctity of the team bus in which to dissect their performances – whether good or bad – but at the UAE Tour there are no team busses with blacked-out windows, merely ageing mini-vans with plastic chairs scattered around a car park forecourt. Imagine concrete glamping with your work colleagues, only worse. Much worse.

When something goes right, as it did for Jumbo-Visma today when they set up Dylan Groenewegen for the win on stage 4, you can see the joy and celebration as the riders and staff enjoy their moment of success. But when it goes wrong, as it did for Sam Bennett and his Deceuninck-QuickStep team the mood is entirely different.

So different, in fact, that the riders were off-limits to the press after Bennett had faded to fourth in a messy sprint. Quotes from the Irishman were later provided by the team but it was far more insightful to watch from afar as he and his lead-out train analysed their performance in full view. What was said between the riders wasn’t clear – they knew after all that they were in public view – but their faces couldn’t hide the deflation after they had once again narrowly missed out on a win here.

UAE Tour: Sam Bennett hits 1,400 watts and the barriers but loses to Ewan

Later Bennett praised his team after they had pursued the day's main break for most of the stage, before explaining that he and his team had switched their lead-out for the tricky finale in Dubai.

"The team rode really well and rode from the beginning to try and control the break. We rode really well in the final. We tried to change things up with [Michael] Mørkøv in front of Shane [Archbold] just to see how that went. There was no real particular reason, we just wanted to see," he said.

'I think sometimes it's good to swap so that they get the perspective of the other guy, and that they understand each other and get a better flow. We tried something different but it was very hard to hold each other's wheels today. It was very messy. We came into the last corner pretty well."

Bennett jumped first in the sprint and although he looked rapid when he rose from the saddle and accelerated he lacked the legs to finish the job. Groenewegen and the rest pounced and the Irish road champion was forced to settle for a minor placing.

"We accelerated out and then I saw an opening and took a run at some guys, decided to go rather than wait. When I hit the front it was a bit early but I just didn't have the legs. When I kicked I was quick because I had that run at the guys but then I died really quick. I just had bad legs today. If I'd had good legs today then maybe it would have been different but the power wasn't there today, unfortunately."

Bennett has two more stages in this year's race to nail down his leadout and the timing of his sprint before it's too late. Given the speed in his legs, that aim is certainly achievable and if that happens the mood around the team van will certainly be different.