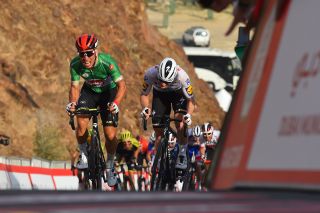 Bennett has to bow to Ewan on Hatta Dam (Image credit: Bettini Photo)

Sam Bennett (Deceuninck-QuickStep) threw everything he had at the final climb to Hatta Dam on stage 2 of the UAE Tour but the Irish sprinter was still forced to settle for second place behind last year's Dam buster Caleb Ewan (Lotto Soudal).

It was Bennett who kicked for the line first and, although he briefly held the lead, he was forced to concede defeat to his Australian rival, who now leads the UAE Tour after two days of racing.

At the team vans, under the setting sun and the peak of the Hatta Dam, Bennett stressed that he was pleased with his ride but that a critical mistake in the finale cost him dearly.

"I checked right and then rode into the barriers for a split second, and that gave him [ed. Ewan] about a bike length. He got a bike length and I couldn’t get it back but I kicked again and then we drew even for a second but I just didn’t have the legs to get the jump. I tried everything by going early and getting the gap, the gearing was okay, but there was nothing else I could do."

Ewan, the lighter of the two, won in similar circumstances 12 months ago. He finished second on stage 1 to Pascal Ackermann but told reporters that a repeat of his Hatta Dam exploits were unlikely.

With a slightly different approach to the final climb, the route was said to be far more testing this time around. The pace and steepness of the rolling climbs certainly proved too much for some, with Mark Cavendish, Ackermann and the returning Chris Froome all dropped before the last ascent.

Bennett was well-protected by his teammates, and shared his power stats at the finish.

"I did 1400 watts for five seconds but after the climbs and the run-up it’s all uphill for 6km," he said.

"I think that this is good for my head, to know that I can do that effort after racing in the finale. I’m happy with my performance."

Bennett might be without a win here in the UAE Tour but he still has three more potential sprint stages to address that. The form is clearly in the right place.