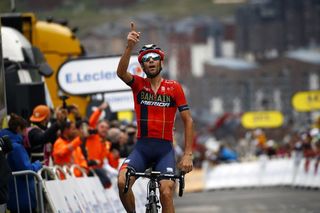 Vincenzo Nibali will target the Giro d'Italia, the Tokyo Olympics and the testing Road World Championships in Switzerland during his first season with Trek-Segafredo, his new team manager Luca Guercilena has confirmed.

Nibali turns 35 on Thursday, and will race for the last time in Bahrain-Merida colours this weekend at the Shanghai Tour de France criterium in China, but is about to turn a major page in his career and start a new chapter with Trek-Segafredo.

He has already visited the Trek headquarters in Wisconsin and met many of his new teammates in the men and women's team.

He will pull Trek-Segafredo's 2020 red and white colours on January 1 and likely make his racing debut in Europe in February as he carefully builds for a long 2020 season that includes two peaks of form but no Tour de France.

Ciccone to ride under Nibali's wing in 2020

Guercilena confirmed that Richie Porte is set start the 2020 season on form for the Tour Down Under and the Australian is likely to again lead Trek-Segafredo at the Tour de France. Bauke Mollema's goals are still to be confirmed but are likely to include either the Giro d'Italia or Tour de France.

"Vincenzo was enthusiastic and ready to start a new adventure with the spirit of a young guy," Guercilena told La Gazzetta dello Sport of Nibali's presence in Wisconsin.

"He has the chance to start a new chapter in his career with a new set-up. When that happens it's always motivating. To make sure things work as well as possible, we've all got to live up to the expectations."

Guercilena confirmed Nibali would have two peaks of form in 2020. With the Giro d'Italia and Olympic Games road race his major goals, it's impossible to also target the Tour de France.

"Vincenzo's main goals are the Giro d'Italia, the Tokyo Olympics and the World Championships in Switzerland," Guercilena made clear.

"In modern-day cycling, three peaks of excellent form in the same year are impossible. It's important to balance things carefully and try to have two peaks."

Vincenzo is a leader – he joined our team to get results

Nibali has recently returned home from a holiday in the Maldives and will begin training for 2020 after Shanghai and a personal sponsor trip to South Africa.

Trek-Segafredo will have a training camp in Ragusa, Sicily in December and another in January in Mallorca. However, Nibali could enjoy a spell at altitude in late January.

"We haven’t decided when he makes his season debut but were considering a start in Europe in the second half of February," Guercilena confirmed. "Vincenzo could also spend some time on the track in Apeldoorn in early December for some tests that could be repeated in Mallorca in January."

Nibali joins Trek-Segafredo with his trusted coach Paolo Slongo, soigneur Michele Palini, doctor Emilio Magni and younger brother Antonio. Guercilena has already built a group of riders around Nibali that will follow a similar race programme. These include Giulio Ciccone, Gianluca Brambilla, Nicola Conci and Antonio Nibali. New signing Kenny Elissonde could also be part of the unit for the Giro d'Italia.

"I'd describe Vincenzo as quiet and discreet. But he knows what he wants and speaks his mind. His charisma is clear to see in the decisions he takes and the ideas he wants to develop," Guercilena said.

"Vincenzo is a leader, he's joined our team to get results. The young riders in the team have to learn from him, how he focuses on the details, how he focuses on a goal.  But that's not his priority; he's here get to results and show he's a leader. We'll try to help him do that."