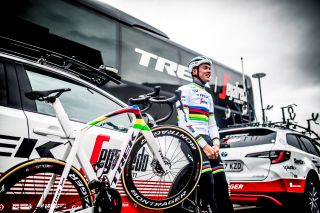 The 2019 UCI Road World Championships saw a raft of nationalities land on the podiums but one of the underlying themes from Yorkshire was the success enjoyed by Trek-Segafredo, with three new world champions crowned over the week.

Mads Pedersen stole the show in the elite men’s road race, but it was juniors Alex Tiberi and Quinn Simmons, champions in the time trial and road race, respectively, who illustrated Trek-Segafredo's new and adaptive approach to rider recruitment. Both riders are set to join Trek shortly – Tiberi will race another year at U23 first, while Simmons will head straight to the WorldTour in 2020.

The new Evenepoel: Quinn Simmons takes the world by storm

Pedersen: Now I want to win a Classic but it doesn't have to be in the rainbow jersey

For a team that endured a reputation of focusing on experience rather than youth, the sight of two budding recruits in rainbow jerseys will fill the American squad with new-found confidence and a lease of life next season.

The team’s roster for 2020 still contains a core of maturity, with Vincenzo Nibali the obvious marquee addition. However, next year’s line-up also includes 11 riders aged 25 or under. Back in 2016, when Fabian Cancellara was creaking towards retirement and elder statesmen Ryder Hesjedal and Frank Schleck were on board, the U25 collective stood at just four. Three of that quartet are still with the team, while a raft of riders in their mid-20s should be approaching their best years.

Trek-Segafredo is no longer a one-stop retirement home. Instead, they have a blend of ages and vibrancy about them.

"We've changed the scheme, with more focus on GC than one-day races, but we've also got young kids coming in," team manager Luca Guercilena tells Cyclingnews as we meet in a rammed coffee house adjacent to the Worlds finish line in Harrogate.

"These young riders can make mistakes but they also have this raw competitiveness and aggression in races. They're committed to the development and we've tried to scout a group of riders that had the skills we were looking for."

Perhaps the biggest surprise is that it took Guercilena so long to stamp a younger mark on this team. After all, his first job in cycling came at the famous Mapei center, where a U23 programme contained a host of talented names that included Michael Rogers, Pippo Pozzato, Bernhard Eisel and, of course, Cancellara.

Trek's recent signings of Alberto Contador, Richie Porte, and now Nibali have perhaps papered over the quiet revolution within Trek since Cancellara's retirement, but the results at Worlds brought Guercilena's intensified drive for youth front and centre in the public eye.

"We've tried to build a five-year strategy with Trek, and that means developing these riders with our mentality," he says before confirming the rumour that he turned down the chance to sign Rohan Dennis on a mid-season move from Bahrain-Merida.

"We looked at testing the young riders, checking their results and their physiological data. We then looked at their personalities and their behavior. We interviewed them and talked to them about their goals made them understand that giving them a chance means nothing if they don't take the opportunity and work hard.

"I've explained to our sponsors that if you want to be good long-term then you need to draw a line and start from scratch for one year."

It's also fair to add that Guercilena's development of youth hasn't just been implemented overnight. Those three U25 riders from 2016 that remain on the team are Jasper Stuyven, Edward Theuns, and Pedersen, while Matteo Moschetti, Nicola Conci and Giulio Ciccone have joined the team in recent years.

The plan isn't just about signing riders who burst onto the scene but developing the in-house talent that already exists within the Trek-Segafredo walls.

"We've invested in Moschetti," Guercilena points out as just one example on the list. "He's young but he has talent so we'd like to give him time. Then, in the second half of the season, we've seen that Theuns can sprint at a high level. Of course, what we don't have is a rider or a sprinter who can ensure us 15 victories a season, but we hope that Moschetti can progress.

"For sure, the goal is to build up riders internally or sign riders who can still perform at the very top of the sport for another four or five years - not riders who maybe have a couple of years left. That's helpful in certain areas but not in others.

"It's clear that a big name brings exposure to a brand but we can't just rely on that. We need young riders who are up-and-coming. It might take two or three years to pay off but that's the plan.

"What we've also tried to do is define roles for the younger riders. So if we've identified a young rider with a big engine and who can help the team, we've explained to him what his role will be. That's a real shift and change for us."

While Guercilena and Trek-Segafredo can look to a promising future and a new crop of young talent, the team will still rely on their old guard to define whether 2020 is a success on the road.

Nibali has been signed on a three-year deal that will take him to his 37th birthday, while Porte has one more year on his current contract. Bauke Mollema – always a safe pair of hands – will be 33 in just over a month, while Ciccone should be reaching his prime in the next couple of seasons.

The Grand Tour strategy for 2020 has yet to be defined and, with Nibali eyeing the Olympics Games in Tokyo, the squad will have to juggle several objectives. That said, they head into the new year with arguably their most robust stage racing squad in years.

Porte, who was underwhelming this season due to persistent health issues, will target week-long stage races through the year, while Nibali will mostly likely pick between using the Giro or the Tour as his Olympics prepration. Mollema will split his time between personal ambitions and working for the team, and Ciccone will have another free role.

"I truly believe that we've improved the quality of this group," said Guercilena. "We'll change the scheme as we start with Mollema, Ciccone, Porte and Nibali. It's a good group of riders for GC and the trend nowadays is for teams to have more than one leader for a single race because the competitiveness is really high.

"I don't see there being any issues with programmes because there are plenty of goals to focus on. They need to understand, though, that if a race is not their goal then they need to race for others."

Nibali may not have won a Grand Tour since 2016 but Guercilena believes that, if the Italian remains motivated and hungry, he can still be a significant factor in the future. Nibali hasn't been signed in order to boost coffee sales, according to his future boss.

"We had the experience with Alberto where he came to us and had a great season. He didn't win many races but he was still competitive and second in many of the WorldTour races that he did, before taking fourth at the Vuelta.

"That level of riders are always competitive and age isn't the biggest factor, so for sure, I think Nibali has another good couple of seasons in him. A lot depends on motivation but from my experience, a rider like Vincenzo is always motivated because they like to win."

As for Porte, the focus will be on shorter events, with the Tour Down Under once again acting as the curtain-raiser on his season. The Australian will then be expected to compete in several week-long WorldTour races before turning his attention to either the Tour or the Giro, where the pressure will be lifted in terms of a GC bid.

"He's not happy with his season, and we're not super happy either," Guercilena admits.

"What he showed in Australia this year, or in California, proved that he's still up there. We tried to get him ready for the Tour this year but his potential is moving more towards one-week races and then he'll still be competitive in Grand Tours but focusing everything on a Grand Tour limits his capacities.

"He's good on short climbs and he's good at time trialing, and there are many one-week races that suit that style of rider. At the same time, this isn't anything new. He's proved this in the past."

When it comes to the Classics, the team will be hoping to put a disappointing season behind them. The confidence they'll gain from Pedersen's memorable Worlds win could be the spark they need.

"This year, we weren't good enough in the Classics. That was clear. In the second half of the season, we've improved, but now it's up to the guys like Pedersen, Theuns, Stuyven to prove they can do it in the big game," Guercilena said, two days before Pedersen's win.

"They have results but they're not young guys anymore."

The once youthful Pedersen – he's still just 23 – and Stuyven have been usurped by an even younger crop of riders, and the squad now have a more balanced look and feel about them. If everything comes together for Guercilena and his team, 2020 could be the year a sleeping giant of a team finally wakes.