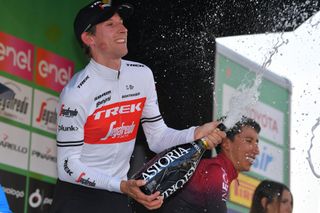 Bauke Mollema has told the Dutch media that he and Trek-Segafredo teammate Richie Porte are likely to target next year's Tour de France, and that the team's new signing, Vincenzo Nibali, will concentrate on the Giro d'Italia, and that "we'll probably do the Vuelta a España together".

Thirty-three-year-old Mollema also told Dutch newspaper AD on Saturday that he would be focusing on doing more one-day racing in 2020, following his victory at this year's Il Lombardia and top-10 finishes this season at races such as Flèche Wallonne, the Grand Prix Cycliste de Montréal, the Clásica San Sebastián and Milano-Torino.

"The big dream is to win a championship. I'd really like to wear a special jersey for a year," Mollema said, referring to the World Championships, the Olympic Games, the European Championships and the National Championships.

By winning this year's Il Lombardia, Mollema proved that the biggest and most demanding one-day races are within his grasp, with both the Worlds and the Olympic road races boasting the kind of hilly parcours that should suit the Dutch climber.

"I had already won stages at the Vuelta and the Tour, and that was beautiful," he said. "But winning a Monument is very special. It's difficult to compare victories with each other, but I think that Lombardia counts for even more in cycling. You notice it in the reactions, in the feeling with which I went into the winter," he told AD, having won the Italian one-day race in mid-October.

Not that Mollema will give up on riding Grand Tours any time soon, and will continue to share leadership duties at Trek-Segafredo with Porte and Nibali.

"I'll ride for the general classification at the Tour, Nibali will go to the Giro, and we'll probably do the Vuelta together – not for the GC, but to try to win stages, and Richie will also go to the Tour to ride for the GC," revealed Mollema, accepting he will never have total leadership status.

"The team needs big names to sell bicycles – I understand that," he continued. "A rider like [former Trek teammate] Alberto Contador gives them more publicity than me, but that's not a problem.

"This season, Porte joined, and I had the best year of my career," said Mollema. "Next year, Nibali will join us, and we've already put together our race programmes."

Following 12 seasons as a professional, and counting, Mollema said that he thought that the sport has changed considerably, becoming far more competitive. But that change has come at a cost.

"Nowadays, every team has two or three good general-classification riders," he explained. "It's become much more professional; it's more about the details. I've noticed that I've changed, too: I've started to think much more about my food. Now, everything's organic, with much less sugar. In my early years as a professional, I chose to eat brown bread, and that was abut it.

"Now, you have a radio in your ear, and your diet is pre-programmed in a similar way, and in that respect the sport's lost a little of its charm," said Mollema.

Following his career-best sixth place overall at the 2013 Tour de France, Mollema was elevated as a Grand Tour contender in the Dutch public's eyes, although he admits that the interest in him perhaps isn't quite at the same level it once was due to the success of Tom Dumoulin and a new generation of Dutch riders.

"I've never complained about attention – certainly not after that 2013 Tour," he said. "But it is a bit less as there are so many other good Dutch riders, and I don't ride for a Dutch team, either. I don't mind; I've never wanted to be the centre of attention," he said.

When it came to the question of how much longer he was likely to still be able to race at his current level, Mollema warned that he wasn't going anywhere.

"I've got the feeling that I can keep going for a few more years yet," he said.

"Perhaps because I started racing a bit later than some, I'm a bit fresher in my head than riders who competed in all the youth competitions. For example, I'd be happy to ride the Tour of Flanders and all three Grand Tours each year for the next three or four years. I don't feel old, and have got plenty left yet."