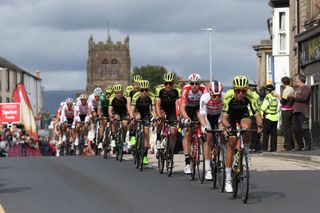 Mick Bennett, director for the 2.Pro-ranked Tour of Britain said in an interview with ITV on Monday that he is optimistic his race can be held in 2020. The event is scheduled for September 6-13 which puts it in a slot overlapping with the Tour de France. All professional races are still up in the air until the trajectory of the coronavirus pandemic is better understood.

With the French government keeping restrictions against mass gatherings in place until the beginning of September, Bennett said he would be "totally staggered if the Tour de France goes ahead".

"Staggered, but in a positive way if it happens. It's three weeks long and a global event, so much more so than the Tour of Britain, in terms of the logistics, the number of people on the race and the travel involved with people coming from across the world and areas with different levels of restrictions."

The UCI is set to announce a new calendar that, if it is identical to one leaked on Monday, is expected to begin on August 1 in Italy with Strade Bianche, the Tour de Pologne, Milan-San Remo and the Critérium du Dauphiné preceding the various national championships and GP de Plouay. The Tour de France, originally due to start on June 27, was given a new date of August 29 - September 20.

If the leaked calendar is correct, the Tour of Britain would overlap with both the Tour de France and Tirreno-Adriatico, which is provisionally set for September 8-14.

The overlap is less, however, than what was originally planned for 2020 after the calendar was shuffled to accommodate the Olympic Games, putting Tour of Britain in competition with the Vuelta a España, Grands Prix Quebéc and Montréal and the BinckBank Tour.

Organisers Sweetspot previously confirmed to Cyclingnews that the Tour of Britain's dates would not be altered and they were working with broadcasters to ensure live coverage of both Tour of Britain and the Tour de France.

While the UCI is not yet including non-WorldTour events on the calendar, Bennett is hoping that Tour of Britain, which is due to begin in the southernmost town of Penzance and finish in the far north at Aberdeen, will be given the go-ahead by the British government.

"We have to hope that for us in the UK if conditions allow, perhaps a shorter or smaller race with fewer spectators, less complex logistics, is more possible, but we don't have a crystal ball, and really to a large extent it is probably in the hands of the French and British Governments," he said. "The Tour de France, Giro, World Championships are all hugely important for cycling as a sport, and if they go ahead then there is hope for all cycling events.

"But it is so hard to make any predictions right now without looking foolish, especially as things will vary so much from country to country going forwards."

Sweetspot also arranges the Women's Tour, a WorldTour event which was due to take place from June 8-13, but have chosen to cancel the race and focus in 2021 instead.

Whether or not the Tour of Britain can go ahead will depend upon Sweetspot being able to travel to host cities and begin the preparations for the race, but being able to do that depends on the loosening of travel restrictions.

"Probably by the middle of June we need to get boots on the ground," he said. "It would be a massive blow to us as a company but also the country (if it doesn't go ahead).

"We don't have another event that is going to cover Penzance to Aberdeen, the full length of the country, and for the general public to lose that would be a big blow. I think it would be greatly missed, and I'd hope so as well as it would illustrate where we are with the Tour of Britain as part of the fabric of major events in the country."