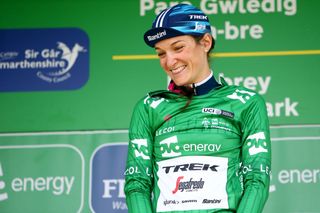 The 2020 Women's Tour has been cancelled, with organisers SweetSpot deciding to work on the 2021 edition of the British stage race and plans to broadcast the racing live on television.

The Tour of California was cancelled last year due to financial reasons. The UCI is due to unveil a new race calendar for late summer on Tuesday but any racing will depend on decisions by specific countries and governments.

In mid-March the organisers announced the 2020 edition of the Women's Tour would be delayed but with the outcome of the COVID-19 pandemic on road racing still unknown and a significant number of cases in Britain, SweetSpot have now given up on finding a date in 2020 for the six-stage race and plan to organise the race in June 2021. SweetSpot said the 2021 race will cover the route planned for 2020 from Oxfordshire to Suffolk in southern England.

"Following discussions with stakeholders and sponsors, as well as British Cycling and the UCI, we have decided to work towards June 2021 for the next edition of the Women’s Tour, and will not seek to re-arrange the race later in 2020," Hugh Roberts from SweetSpot Group said announcing the news.

"We recognise the unprecedented nature of the current global situation and the challenges for the UCI calendar and so wanted to take an early decision not to look for an alternative 2020 date."

The Women’s Tour women’s race was created in 2014 and quickly rose to the top-level of professional bike racing when it joined the Women’s WorldTour in 2016. When OVO Energy took over as title sponsor the event became one of the most attractive races of the series and OVO Energy brought parity to the Women’s Tour prize fund to that of the men's Tour of Britain. The peloton competed for €97,880 in 2019 across six days of racing. Lizzie Deignan won the 2019 race as she returned to racing after maternity.

SweetSpot and British Cycling have a long-term agreement to organise the race and hope to have live television coverage in 2021.

"With the extra time now available we look forward to making next year’s Women’s Tour even bigger and better than before and a fantastic celebration of cycling and Britain," Roberts said.

"We are now working with partners on our plans for the Women’s Tour to be live streamed for the first time in 2021 and are also exploring opportunities to bring the race closer to our fans than ever before in these challenging times, such as the opportunity to race and ride past stages on their home trainer."

Organisers have applied to the UCI for dates from Monday 7 to Saturday 12 June 2021 with final confirmation of the dates and the 2021 UCI Women’s WorldTour calendar due in the coming months.