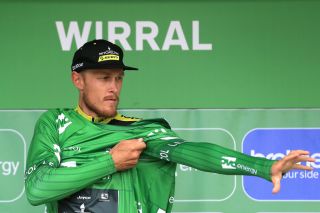 The 2020 Tour of Britain is forging ahead with plans for this year’s race, despite the ongoing lockdown across the UK and a scheduling conflict with the postponed Tour de France, which Hugh Roberts, CEO of promoter SweetSpot, admitted was "a bit of a slap in the face".

The reshuffled UCI calendar, which moved the Tour to an August 29 start date, puts the British race, scheduled to start in Penzance on September 6 and finish in Aberdeen on September 13, in direct conflict with the biggest event of the season.

In a statement to Cyclingnews, SweetSpot confirmed that the new dates for the Tour de France don’t affect its plans.

White: We’re heading for the most competitive Tour de France field ever

"There are no plans to change the date for the Tour of Britain. We are still working towards putting the race on in September but are mindful that this will only be possible if the wider situation allows us to."

In previous years, the British race has had to contend with a conflict with the Vuelta a España, but the clash with the rescheduled Tour de France will be a different proposition entirely.

"It was a bit of a slap in the face," Roberts said, "but it didn’t come as any huge surprise.

"The only surprise was that we weren’t consulted. I don’t even know if the UCI consulted British Cycling. So that part of it was not ideally handled, but then in these difficult circumstances I don’t suppose the UCI are able to go out and ask everyone’s opinion."

Roberts said he would be "pleasantly surprised" if the Tour de France goes ahead but added that, if it does, the Tour of Britain will "probably" also be held.

"The stance we are adopting is that if the virus is behind us, then if that happens to coincide with the Tour of Britain, it will bring a lot of joy to a lot of people. We are working and looking ahead as usual," he said.

Roberts does not feel that the quality of the British race would suffer from the clash with the Tour.

"We have always had a scheduling conflict with the Vuelta, but that hasn’t really been a problem and a lot of riders have used the Tour of Britain as prep for the Worlds. I’m not saying that the field won’t be affected by the Tour, but we will get some big teams and we will get some big names."

Another thorny issue to resolve is the now simultaneous TV coverage of both races on television, but Roberts said that SweetSpot have been "working closely with ITV" to resolve this.

"Our race days coincide with a rest day and a couple of flat stages on the Tour, so we are looking at bringing our start times forward on the basis that people would rather watch our stage finishes than their stage starts," he said.

"In fact, it might mean that there’s a feast of cycling on live each day, plus there will be highlights of both races each evening."

One option that he was wary of, however, was any suggestion to run the Tour of Britain behind closed doors.

"I don’t know if you can really run a race 'behind closed doors'," Roberts said.

"The government will give us a steer, but you obviously can’t run a race in lockdown situations. You can prevent people travelling to watch the race, but I can’t see how you can prevent people standing on their doorstep if the race is going past. But we will follow all public health and government guidance and err on the side of caution."