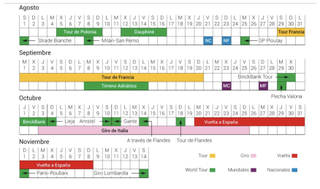 A possible revised 2020 UCI WorldTour calendar could see the three Grand Tours taking place in the space of 71 days and the last Monument, the Giro di Lombardia, bringing down the curtain on racing on November 14.

The unofficial plan, leaked to Spanish newspaper AS and published on their website on Sunday morning, is understood to be a probable race schedule, but the newspaper article emphasizes that the plan has yet to be confirmed and other options remain on the table.

The other massive factor to be borne in mind is the ongoing development of the pandemic, which has already seen the cycling season cancelled and changed to the current shadow of its former self. Further outbreaks of the pandemic, or tightening of social distancing and other public health regulations could well have a considerable knock-on effect.

Should, however, the leaked plan go ahead as AS postulates as probable, racing would start with Strade Bianche on Saturday, August 1, and the Tour de France’s postponed start in Nice on August 29 remains in place.

Perhaps the most striking aspect of the possible plan is the overlapping of the Giro d’Italia, running from October 3 through to October 25 with both Monuments and the Vuelta a España - which in turn coincides with Paris-Roubaix.

Liege-Bastogne-Liege would take place on October 4, the Tour of Flanders on October 18, and the Vuelta a España, already reduced in length to 18 stages, would start on October 20, meaning there would be six days Grand Tour racing overlap in Spain and Italy. Further on, Paris-Roubaix is set for  November 1, coinciding with the second weekend of the Vuelta, which finishes on November 8.

Of the four-week-long events currently on the provisional schedule like the Binckbank Tour, Tirreno-Adriatico - run during the Tour de France - Tour de Pologne and Dauphiné Libere, none of them last longer than six days.

Many races, including several one-day events, that have not - yet -  been or postponed until 2021, like the Canadian WorldTour one-days or the Tour of Guangxi, are not on the calendar published by AS.

But given the plan is understood to be a draft and far from being set in stone, other races currently not pencilled in may well be included in a later, more well-defined structure.

The definitive UCI plan is due to be published on Tuesday morning, although there has already been one delay.