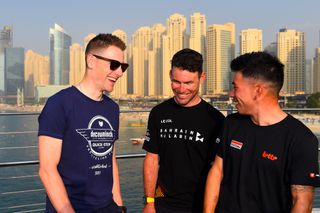 When race organisers RCS announced the roster for this year's UAE Tour pre-race press conference there was little surprise in the fact that the line-up was dominated by sprinters.

A climber will undoubtedly win the race's overall title but it's arguably the depth of the sprint field that makes this year's UAE Tour so compelling. The Irishman Sam Bennett perhaps put it best when he told the gathering media that: "The competition is very high here. There are more top sprinters at the UAE Tour than at the Tour de France in the middle of the season, so it'll be interesting. I just hope to continue with the success we had in the Santos Tour Down Under."

Bennett's assessment is justified. The only sprinting heavyweights not in the Middle East are arguably Elia Viviani and Peter Sagan, and given that Dylan Groenewegen is present, but will not race the Tour de France, the UAE Tour has certainly attracted the best sprint field we've seen since 2019.

Pogačar: UAE Tour will be my first big goal of the season

There are also several interesting subplots within the sprinting fraternity at this year's race. This will be the first time Bennett and Pascal Ackermann have gone head to head since the Irishman left Bora-Hansgrohe at the end of last year.

The Irishman's dispute was never with the German, rather the team's management of a situation that left Bennett without a ride in either the Giro or the Tour this year. It's unlikely that Bennett and Ackermann will single each other out in the sprint battles that lay ahead – that would be too shortsighted given the depth in this year's field, but it still feels as though a win for either rider would provide them with a welcome confidence boost.

"My performances at last year's Giro were unexpected, and I hope to continue in the same good shape, and my first races this year have gone very well," Ackermann told the press, referring to his win in Almeria earlier this month and two second places during the Challenge Mallorca.

"Winning here would make it special with all the good sprinters in contention," he added.

For Caleb Ewan, who claimed his first win in Lotto Soudal colours at this very race twelve months ago, the hope is to keep his momentum in check after two stage wins at the Tour Down Under. He comes into the race without Roger Kluge but in Jasper de Buyst he has a highly-rated last man.

"The season started as well as I had hoped, but I've not been racing since the Santos Tour Down Under. In training, I feel good. To win here as a sprinter, you need to be in top shape against all these guys!"

Groenewegen's first and only race so far this year came earlier in the month at Valenciana. The Dutchman was in flying form, winning two stages, missing out on a third to Fabio Jakobsen, but taking home the points jersey as a way of compensation.

"The season started as well as I had hoped, but I've not been racing since the Santos Tour Down Under. In training, I feel good. To win here as a sprinter, you need to be in top shape against all these guys!"

As for Mark Cavendish, he arrives at the race with uncertainty over his plans in July. A Tour de France spot is far from set in stone, and at some point, he must deliver wins to justify the selection. His ride at the Saudi Tour earlier this year saw him support his teammates but victories will be required sooner rather than later. At the UAE Tour the opposition couldn't be tougher but at the very least Cavendish needs to show progress.

"We went to the Tour of Saudi Arabia with high hopes. It was the first race for our sprinters' team, we won GC and two stages, we were super happy with that. It's nice to be back in shape. We have the UAE Tour to finish that block in the Middle East. We don't have the same group here but the same high ambitions."