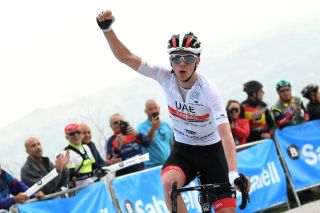 Fresh from overall victory at the Volta a la Comunitat Valenciana, Tadej Pogačar will target further success at the UAE Tour, which he has described as his first big goal of the 2020 season.

The 21-year-old will be a pivotal part of the UAE Team Emirates squad at the Tour de France in July after winning three stages and placing third overall in the Vuelta a España in his debut professional season.

Pogacar’s sparkling 2019 campaign saw him secure overall victories at the Volta ao Algarve and Tour of California ahead of that remarkable Grand Tour debut in Spain, and he has begun the new season in a similar vein, claiming two stages and the overall in Valencia.

"After Vuelta Valenciana I feel confident knowing that my form is good," Pogacar said in a statement released by his team. "After the winter you are always unsure where you stand but I worked really hard in training and it seems to have paid off so far. UAE will be the first big goal of my season building up towards the Tour de France."

Pogacar eschews the Volta ao Algarve this season in favour of the UAE Tour, which takes place from February 23-29 and features two summit finishes at Jebel Hafeet. The Slovenian will be joined in the UAE Team Emirates squad by Diego Ulissi and Davide Formolo, while Fernando Gaviria – who claimed a hat-trick of stage wins at the Vuelta a San Juan – will target further sprint success.

"With myself, Diego and Davide we have many cards to play in the mountain stages and then for the sprints we will be focused on Fernando," Pogacar said. "The atmosphere in the team is very good, winning obviously helps this and we’ll be aiming to continue that good run into UAE Tour and beyond."

Gaviria will again by piloted his lead-out man Max Richeze in the bunch finishes in UAE, while his sprint train will also include Oliviero Troia and Sven Erik Bystrom.

"The UAE Tour is our home race and one of the most important fixtures in our season," said manager Joxean Matxín Fernandez. "For the mountain stages we have the strong trio of Pogačar, Formolo and Ulissi. We want to be active in all stages in UAE and we are going there full of confidence after our strong start to the season."