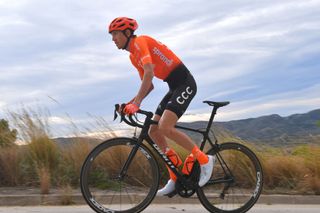 Ilnur Zakarin will start his first race of the 2020 season, and his first since joining CCC Team, at the UAE Tour in Dubai on Sunday, and says that he's ready to ride "aggressively" on the two ascents of the Jebel Hafeet climb – on stages 3 and 5 – where the overall title for the seven-day race is likely to be won.

The 30-year-old last pushed his pedals in anger on his way to 53rd place overall at the Tour of Guangxi in China at the end of October, ending his five-year stint with Katusha-Alpecin, whose WorldTour licence was bought by the Israel Academy team in the off-season, becoming Israel Start-Up Nation for the 2020 season.

Zakarin, who took a solo victory on stage 13 of the 2019 Giro d'Italia at Lago Serrù – his first win in almost two years – described his announced move to CCC last August as being the start of a "new chapter in my life".

The Russian rider has finished in the top 10 in all three Grand Tours – fifth at the 2017 Giro d'Italia and third at the Vuelta a España the same year, and ninth at the 2018 Tour de France – and has a Tour stage win and two Giro stage wins to his name.

"This season in general consists of mixed emotions," Zakarin said in a CCC press release on Thursday. "On one hand, everything is the same: I'm still doing what I love and what I've been doing for all my life.

"On the other hand, everything is new. The off-season was nice, which I spent pretty much all of with my family and with my kids, but it was also very productive on the road. I arrived at Mount Teide, 2,200 meters above sea level, with [teammate] Pavel Kochetkov, a month before the UAE Tour and, after 16 days there, I'm feeling ready and motivated to race," he said of his altitude camp on the popular training roads of the volcano in Tenerife, in the Canary Islands, Spain.

"So I'm both excited and really calm at the same time ahead of my first race," Zakarin said. "I just want to show what I can do. I know the Jebel Hafeet climb well, and I'll do my best to ride aggressively."