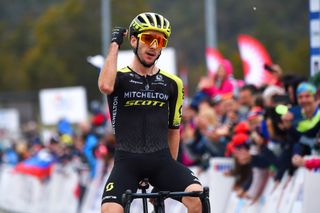 Adam Yates makes his season debut at the UAE Tour on Sunday, and the Mitchelton-Scott climber aims to be in the mix for the two mountaintop finishes at Jebel Hafeet, which is this year used twice – for the finish of stage 3 and stage 5.

"It's exciting to get back to racing, especially at a race that I've never done before," said Yates in a team press release. "My winter training has been going really well, so it'll be good to get stuck in and see where I am.

"As it's my first race of the season, I'll be targeting the two mountaintop stages," he continued, "and hopefully, if I stay out of trouble, then I can make a good GC challenge. But it'll just be good to firstly get back into the rhythm of racing and find my legs again."

Matt White: The back end of the 2020 Tour de France is very hard but the difficulties start straight away

Yates will have the assistance of Tsgabu Grmay on the climbs, while designated sprinter Luka Mezgec will have a number of strong teammates at his disposal, with Jack Bauer, Callum Scotson, Michael Hepburn and Kaden Groves, with the latter ready to step in on sprint duty if necessary, fresh off the back of two stage wins at the recent Herald Sun Tour in Australia.

"We've got a really well-rounded team, with options in both the GC and for the sprints," said sports director Dave McPartland. "So we have both bases covered for the week, with potentially five sprint stages and two climbing days.

"I've never a done a race where we do the same finish twice," he added of the two Jebel Hafeet finales. "It's an interesting concept. I think it will be quite predictive, as we'll see on stage 3 who's got the legs, and it will then be clear how the GC is going to pan out. I think it will be a pretty similar outcome on both stages."

Describing the climb, McPartland continued: "It's not that steep of a climb, and it's on a wide road, so it's not complicated, but I think we can expect Adam to be right up there.

"He will be looking to start the season on the right foot, and a lot of the guys he will be competing against on GC all year will be there," he said, referring to the likes of Chris Froome (Team Ineos), Ilnur Zakarin (CCC Team), Movistar's Alejandro Valverde, Tadej Pogačar (UAE Team Emirates) and Wout Poels (Bahrain McLaren), who all line up for the race in Dubai, in the United Arab Emirates, which runs from Sunday, February 23 until Saturday, February 29.