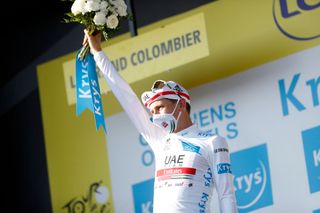 Tadej Pogačar (UAE Team Emirates) heads into the third week of the Tour de France snapping at the heels of race leader Primož Roglič (Jumbo-Visma) with every intention of taking the fight for the yellow jersey all the way to Paris.

The 21-year-old Slovenian was cagey about exactly how he hoped to land the blows that would see him ousting Roglič from yellow across the three Alpine stages and the Tour's single time trial yet to come.

"The battle for yellow is not finished. But I cannot tell you how I'd fight it, because then there is no surprise," he observed.

Although Tuesday's opening Alpine stage looks, on paper, likely to be one for the breakaways, the crunch moment of the Tour's third week comes with its ascent of the Col de la Madeleine and the fearsome climb to the Méribel ski resort on Wednesday.

Pogačar said that he views the Col de la Loze, as the upper segment of the climb to Méribel is known, as one of the hardest, if not the hardest, of the entire Tour. He warned that while it would be possible to make minimal gains, losing a stack of time was also another potential outcome.

"We did a recon of the climb, and on a bad day, it's possible to lose half an hour," he confirmed.

Although reserved about his upcoming strategies, Pogačar did reveal that his worst day in the Tour to date had come on stage 11, despite it being a relatively calm stage in comparison with the mayhem of crashes and coastal crosswinds the day before on stage 10.

"It was when we went slower, I was not feeling so good, while my best days have been in the Pyrenees, the stage I won and the one before. But yesterday," he said about winning on the Grand Colombier, "was not so bad, either."

Asked again about his relationship with Roglič, Pogačar insisted that while they are friends, racing was another story.

"On the road, we all want to win, this is cycling, this is sport," he pointed out. "I look up to him, he is a very strong guy, but if I can win I will take the opportunity to do that."

But whatever the final result in Paris, Pogačar reflected that his rookie Tour de France could hardly, at this point, be considered a failure.

"We'll see if I'm in yellow on Sunday, but even if it's this UAE Team Emirates shirt on the Champs-Élysées, it will have been a good Tour for us."